Jonathan Turley Warns Liz Cheney Irate Staffers Are Turning On Her: “Staffers accusing the Committee of becoming a “Cheney 2024 campaign” 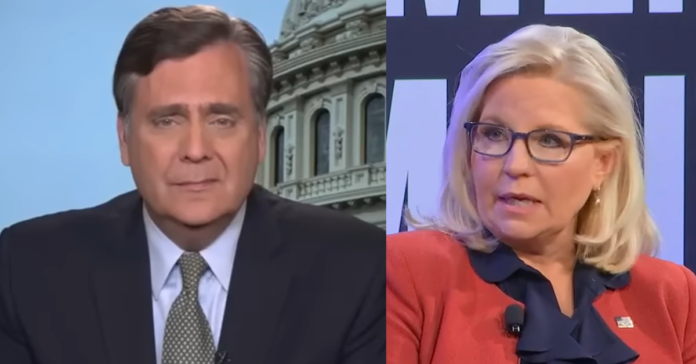 Jonathan Turley issued a warning to Wyoming Rep Liz Cheney over reports Cheney is trying to use the Jan 6 Committee as the starting point of her ‘Cheney 2024’ campaign. Turley said:

“There is a deepening division on the J6 Committee as staffers turn on Liz Cheney over the final report on the January 6th riot. Angry rhetoric is flying with staffers accusing the Committee of becoming a “Cheney 2024 campaign” while both the Cheney spokesperson and Committee spokesperson lashed out at the staff members as “disgruntled” and producing shoddy or biased work.

“The underlying issue, however, is important and revealing. The Committee’s color coated teams include a “Blue Team” on the failure to prepare adequately for the riot. That part of the investigation is reportedly being dumped or reduced.  Members of the “Green” and “Purple” teams are also reportedly irate.”

“Fifteen former and current staffers, who spoke on the condition of anonymity to discuss internal deliberations, expressed concerns that important findings unrelated to Trump will not become available to the American public…Several committee staff members were floored earlier this month when they were told that a draft report would focus almost entirely on Trump and the work of the committee’s “Gold Team,” excluding reams of other investigative work.

“Potentially left on the cutting room floor, or relegated to an appendix, were many revelations from the “Blue Team” — the group that dug into the law enforcement and intelligence community’s failure to assess the looming threat and prepare for the well-forecast attack on the Capitol. The proposed report would also cut back on much of the work of the Green Team, which looked at financing for the Jan. 6 attack, and the Purple Team, which examined militia groups and extremism.

“We all came from prestigious jobs, dropping what we were doing because we were told this would be an important fact-finding investigation that would inform the public,” said one former committee staffer. “But when [the committee] became a Cheney 2024 campaign, many of us became discouraged.”

Turley then warned Liz that staffers are turning on her:

“Now, staffers are turning on Cheney who appears to have objected to parts of the final report and wants the report to focus on Trump. Cheney’s spokesman Jeremy Adler said that the staffers in the other teams produced “subpar material” full of “liberal biases.”

“Tim Mulvey, the spokesperson for the committee, criticized the staffers speaking to the media as “disgruntled” and added that “they’ve forgotten their duties as public servants and their cowardice is helping Donald Trump and others responsible for the violence of January 6th.”

“It is obviously hard to address the alleged shoddy work on these other teams or claims of liberal bias.

“An Inspector General report indicated that police were restricted by Congress in what they could use on that day.

“Previously, it was disclosed that offers of National Guard support were not accepted prior to the protests. The D.C. government under Mayor Muriel Bowser used only a small number of guardsmen in traffic positions.

“That focus was rejected by the Committee members and there were no dissenting views voiced on the Committee as well as a virtual bar on opposing explanations or interpretations of evidence.

“The GOP is now expected to fully investigate what the Congress knew and what it did in the days leading to the breach of the Capitol.

“Clearly, Cheney and others did not believe that the Blue Team full findings were ready to be released.

“However, those findings could be reviewed by the new GOP majority as it seeks full disclosure on why the Capitol was so quickly overrun on January 6th,” he said.

There is a deepening division on the J6 Committee as staffers turn on Liz Cheney over the final report on the January 6th riot. Angry rhetoric is flying with staffers accusing the Committee of becoming a “Cheney 2024 campaign”…https://t.co/LgLMGJee2E

Lauren Boebert Sets Her Critics Straight: “The Left is pissed I won my election, so they’re trying to find something to go after me about”

Kayleigh McEnany Warns Dems Elon Musk Plans To Expose Secret Internal Discussions At Twitter About Censorship: “I was Press Sec at the time when Twitter also banned my personal account after sharing the story, would love answers”