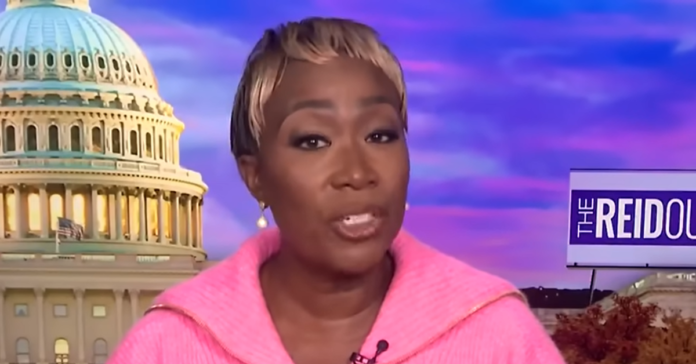 MSNBC’s Joy Reid trashed Thanksgiving and the Republicans on her show “The ReidOut.” She said: “We begin tonight with Thanksgiving, the day we gather with friends and family to enjoy turkey, stuffing, mashed potatoes, and pumpkin pie.

“We throw on the game and catch up on our lives and discuss or quite possibly argue about religion and politics. For millions of Americans, it’s a day of cherished tradition. As Americans, we value those traditions.”

“But it is also to unpack the myth of Thanksgiving. It is a holiday riddled with historical inaccuracies. It is built on this myth that the indigenous welcomed their colonizers with open arms and ears of corn.

“A simplistic fairytale interpretation of a 1621 encounter between indigenous tribes and English settlers that erases the genocide that followed.

.@JoyAnnReid leads #TheReidOut tonight observing, “We are a country that chooses violence over and over again.” pic.twitter.com/dheG9jl6iY

“It’s the truth that Republicans want banned from our textbooks.

“Because here is the secret they want so desperately to keep, we are a country founded on violence. Our birth was violent.

“In 1619, a ship with more than 20 enslaved Africans landed in Virginia, ushering in two centuries of American slavery that left millions in chains or dead.

“When those humans in bondage were finally free, a terrorist organization that was a card-carrying member of polite society, The Ku Klux Klan, picked up where the Civil War ended using violence to maintain white supremacy.

“The Klan is still active, and as Americans, we continue to choose violence. We are a country that chooses violence over and over again.

“There is no facet of American society that is untouched by it.”

.@KenBurns on telling stories about our American history: “If we assume we’re the most exceptional country on Earth, why wouldn’t we be harder on ourselves than anything? And it’s not harder. It’s just true.” #TheReidOut pic.twitter.com/sbR3IgpuPI

MSNBC’s Joy Reid blasts ‘the myth’ of Thanksgiving: ‘Our birth was violent’ https://t.co/nLwzcFTzLL

Herschel Walker Issues Challenge To Joy Reid After MSNBC Host Insulted Him: “Any day of the week she wants to debate she can show up here and I’ll debate her”

Elon Musk To Spill Beans On How Conservatives Were Mistreated By Twitter: “The more I learn, the worse it gets, the world should know the truth of what has been happening at Twitter”