House Republicans Tell Joe Biden The Gravy Train Is Over, Call For Audit On Money Sent To Ukraine 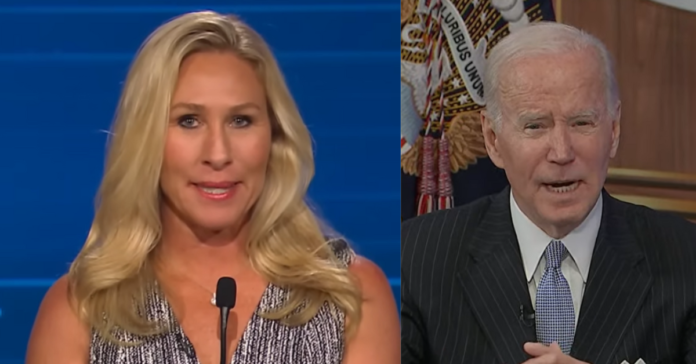 Newly empowered House Republicans put President Joe Biden on notice and introduced a proposal to audit the billions of dollars sent to Ukraine.

The funds the GOP plans to audit will include all military spending, humanitarian aid, and economic aid sent by America to Ukraine. Congresswoman Greene said:

“The American people deserve to know where their hard-earned tax dollars are going to a foreign country that is not a member of NATO and President Biden himself said he would not defend.

“We’re ignoring the dangers happening in our country while we are completely protecting another country’s border and waging a proxy war with Russia.

“The American people are who we represent and I can tell you right now, my district … is not interested in continuing to fund a war in Ukraine and defending Ukraine‘s border while our border is being invaded every single day,” she said.

“Congress sent almost 66 billion in taxpayer dollars to Ukraine over the past year, and President Biden is urging the House to rush another 37.7 billion through a lame-duck session.

“It is unthinkable for the United States to send more funding to a nation tied to cryptocurrency exchange FTX and Sam Bankman-Fried’s election spending.

According to The Washington Times:

Last month, 30 liberal lawmakers in the House urged President Biden in an open letter to push more assertively for peace talks, a clear break within the president.

The lawmakers also suggested Mr. Biden would have strong Democratic support for aid to Ukraine if he followed their advice, urging the president to “pair the military and economic support the United States has provided to Ukraine with a proactive diplomatic push.”

Elon Musk Responds To Leftist Critics: ‘There Is Not One Permanent Ban On Even The Most Far-Left Account Spouting Utter Lies’ https://t.co/jAo3Pgf5Qn