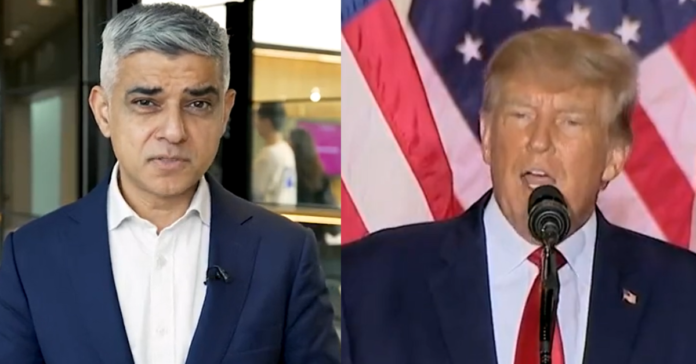 Former President Donald Trump’s nemesis London Mayor Sadiq Khan had a full-blown meltdown over Twitter CEO Elon Musk reinstating Trump’s Twitter account. Khan and Trump have a history of firing back at each other on social media specifically Twitter.

Trump usually cleaned his clock leaving Khan bitter. Khan must have enjoyed having the medium to himself but that is over with Musk bringing back free speech and booting the hall monitors.

Khan called for a social media ban on Trump anyway. He said: “Trump is a dangerous, far-right politician who has a history of inciting violence. He must not be allowed to use social media to preach hate and further fuel the politics of division.”

Trump is a dangerous, far-right politician who has a history of inciting violence.

He must not be allowed to use social media to preach hate and further fuel the politics of division. pic.twitter.com/YxEpppvaT4

On Monday, Trump arrived in Britain with his wife Melania for a three day visit, and he had already blasted Khan before his plane touched down.

“@SadiqKhan, who by all accounts has done a terrible job as Mayor of London, has been foolishly ‘nasty’ to the visiting President of the United States, by far the most important ally of the United Kingdom,” Trump said on Twitter shortly before Air Force One landed at Stansted Airport near London.

“He is a stone cold loser who should focus on crime in London, not me.”

On Sunday, Labour’s Khan said it was important to have good relations with the United States but that Britain should not be “rolling out the red carpet” for Trump. He has also compared Trump to 20th century fascists.

“This is much more serious than childish insults which should be beneath the President of the United States,” a spokesman for the mayor said.

“Sadiq is representing the progressive values of London and our country warning that Donald Trump is the most egregious example of a growing far-right threat around the globe.

“Allowed”? Sadiq, do a better job protecting the people of London from crime and maybe someone might take you seriously. https://t.co/BNFSNjGJdt

Odd how you never utter a condemning word about murderous Islamists. https://t.co/1znhQFJYBQ

Hero Army Vet Went Into ‘Combat Mode’ To Stop Shooter: “I just went into combat mode, if you actually do this stuff it’s in you, I was proud to be a soldier”