Hero Army Vet Went Into ‘Combat Mode’ To Stop Shooter: “I just went into combat mode, if you actually do this stuff it’s in you, I was proud to be a soldier” 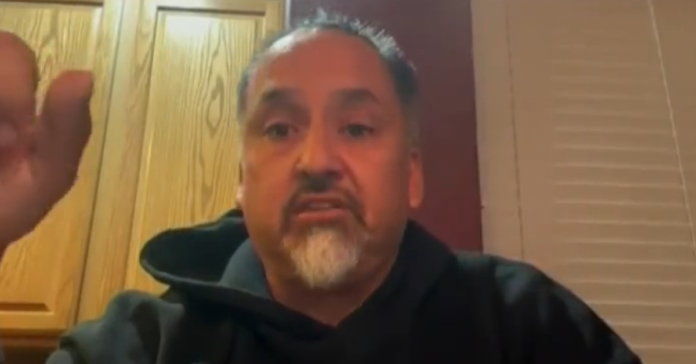 A former U.S. Army officer stepped in and saved countless lives when he went into ‘combat moe’ and stopped Saturday night’s mass shooting at a club in Colorado Springs. Richard M. Fierro was deployed to three deployments to Iraq three times and once in Afghanistan in his career. Fierro left the Army at the rank of major in 2012,

He said: “I don’t know exactly what I did, I just went into combat mode. I just know I have to kill this guy before he kills us. It’s the reflex. Go! Go to the fire. Stop the action. Stop the activity. Don’t let no one get hurt. I tried to bring everybody back.

“If you actually do this stuff, it’s in you. I was proud to be a soldier. I don’t, I don’t like these guys running around here doing GI Joe stuff, and they’re not. I’m not a GI Joe. I’m just a normal guy, man.

“I’m protecting my family. And I reached up and I did what I had to do.

Richard Fierro, hero of the Club Q shooting, describes how he took down the shooter: “… I’m a big dude, man, and this guy was bigger, and I kept wailing on him.”

“And and honestly, I don’t I don’t care about myself in that moment.

“I cared about everybody that was around me and I cared, especially about my family.

“As soon as I got done with that guy and the cop came in, I went across the room and started first aid with my friend who was shot in the chest and the legs in the arms.

“I’m straight. My kids are straight, but we go there…Why? Because it’s about community.

“And I moved her head so she wouldn’t him because he was shot. Chip was right there, her husband was reaching for her.

“So I put her hand in his so that they could be together. I didn’t know if they’re going to make it,” he continued, getting choked up.

“They have to live with this now for whenever. It’s a lot for any human, man.

“This kid that was helping me was kicking another human in the head. And I told him to do it.

“I don’t know what to do. You know, there was a beautiful, one of the other performers was walking by when the kid was getting tired of kicking.

“And she did, she helped him, kicked him with the high heels that she had on, and then ran because she’s probably scared. I don’t know what’s going on in there. I was trying to get people to call the police.”

Richard M. Fierro, one of the men who tackled the gunman in the Colorado Springs Club Q shooting, said it wasn’t about being the hero — it was all about protecting his family. https://t.co/SXoUGH4q4Y pic.twitter.com/fxOFXwEKhW

Jake Tapper Shuts Down Democrats Gloating Over Midterms: ‘You're portraying a very rosy scenario about how well Democrats are doing, you just lost the House”