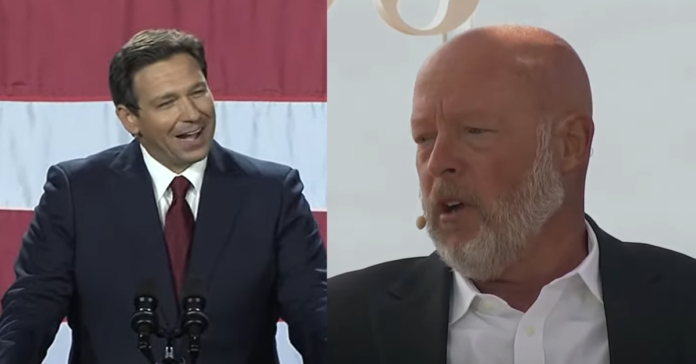 Florida Governor Ron DeSantis is on a roll. He ran a great election and helped rewrite the political map in Florida for a generation. He took on woke corporations and brought them to heel. And now his nemesis, Disney CEO Bob Chapek, is out at the entertainment giant.

Disney replaced Chapek with Bob Iger. Iger was CEO of Disney for 15 years and handed the baton to Chapek who picked a fight he could not win. “We thank Bob Chapek for his service to Disney over his long career, including navigating the company through the unprecedented challenges of the pandemic,” said Susan Arnold, Chairman of Disney’s Board.

“The Board has concluded that as Disney embarks on an increasingly complex period of industry transformation, Bob Iger is uniquely situated to lead the Company through this pivotal period.”

“Mr. Iger has the deep respect of Disney’s senior leadership team, most of whom he worked closely with until his departure as executive chairman 11 months ago, and he is greatly admired by Disney employees worldwide–all of which will allow for a seamless transition of leadership,” she said.

“I am extremely optimistic for the future of this great company and thrilled to be asked by the Board to return as its CEO,” Mr. Iger said.

“Disney and its incomparable brands and franchises hold a special place in the hearts of so many people around the globe—most especially in the hearts of our employees, whose dedication to this company and its mission is an inspiration.

“I am deeply honored to be asked to again lead this remarkable team, with a clear mission focused on creative excellence to inspire generations through unrivaled, bold storytelling.”

During his 15 years as CEO, from 2005 to 2020, Mr. Iger helped build Disney into one of the world’s most successful and admired media and entertainment companies with a strategic vision focused on creative excellence, technological innovation and international growth.

He expanded on Disney’s legacy of unparalleled storytelling with the acquisitions of Pixar, Marvel, Lucasfilm and 21st Century Fox and increased the Company’s market capitalization fivefold during his time as CEO.

Mr. Iger continued to direct Disney’s creative endeavors until his departure as Executive Chairman last December, and the Company’s robust pipeline of content is a testament to his leadership and vision.

Months before Disney CEO Bob Chapek tiptoed into a roiling debate in Florida and before the legislation that opponents would call the “Don’t Say Gay” bill was even filed, Gov. Ron DeSantis delivered a threat to business leaders who got in his way.

“If you are in one of these corporations, if you’re a woke CEO, you want to get involved in our legislative business, look, it’s a free country,” the Florida Republican said last June.

“But understand, if you do that, I’m fighting back against you. And I’m going to make sure that people understand your business practices, and anything I don’t like about what you’re doing.”

DeSantis this month made clear he wasn’t bluffing. A day after Chapek publicly condemned a controversial Florida bill that would ban classroom instruction about sexual orientation and gender identity before fourth grade, DeSantis ripped Disney to a room of supporters.

He called Disney a “woke corporation” and criticized its business interests in China. Fox obtained and posted a video from the private event, and DeSantis and his staff helped spread it on social media.

In a stunning turn of events, The Walt Disney Co. says that Bob Chapek will step down as CEO, with Bob Iger returning to lead the company: https://t.co/KWQpkcipQk pic.twitter.com/aEGXArRCSY