Ilhan Omar Responds To Kevin McCarthy’s Promise To Remove Her From Committees, Slams CA Rep: “It does nothing to address inflation, health care or solve the climate crisis” 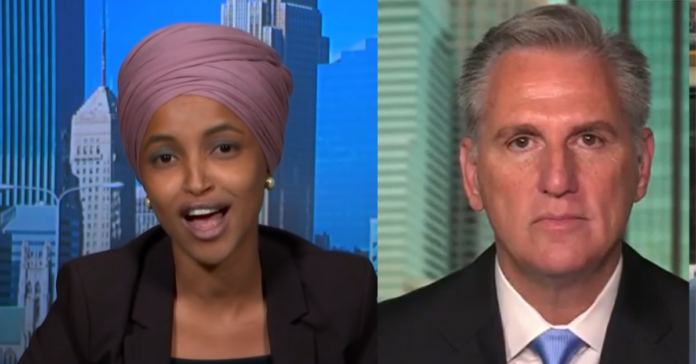 Rep. Ilhan Omar (D-Minn.) fired back at House Minority Leader Kevin McCarthy (R-Calif.) after he said he would follow through on his promise and remove  Democratic Reps. Eric Swalwell, Adam Schiff, and Ilhan Omar from their coveted committee assignments.

Kevin said he will remove Swalwell and Schiff from the House Intelligence Committee and Omar from the House Foreign Affairs Committee. Omar is not happy and said: “From the moment I was elected, the Republican Party has made it their mission to use fear, xenophobia, Islamophobia and racism to target me on the House Floor and through millions of dollars of campaign ads.

“Whether it is Marjorie Taylor Greene holding a gun next to my head in campaign ads or Donald Trump threatening to ‘send me back’ to my country (despite the fact that I have been a proud citizen of the United States for more than 20 years), this constant stream of hate has led to hundreds of death threats and credible plots against me and my family.

“McCarthy’s effort to repeatedly single me out for scorn and hatred — including threatening to strip me from my committee — does nothing to address the issues our constituents deal with.

“It does nothing to address inflation, health care or solve the climate crisis.”

“What it does is gin up fear and hate against Somali Americans and anyone who shares my identity, and further divide us along racial and ethnic lines.

“It is a continuation of a sustained campaign against Muslim and African voices, people his party have been trying to ban since Donald Trump first ran for office.”

“You have Adam Schiff, who lied to the American public time and again.

“We will not allow him to be on the Intel Committee either.

“Look at Congresswoman Omar, her antisemitic comments that have gone forward.

“We’re not going to allow her to be on Foreign Affairs.

“But we’re also going to stand up to what’s happening, not just in the halls in Congress, but what’s happening to our higher education institutions, the antisemitism that’s going on on these campuses and others.

“We will investigate that as well and stop this to make sure that America does have the freedoms that we said we would keep, and we will stand up to it as we move forward,” he said.

Kevin McCarthy says on Fox News that as Speaker he plans to prevent Ilhan Omar, Adam Schiff, and Eric Swalwell from serving on committees pic.twitter.com/gekzYBRXSj

Last year, I promised that when I became Speaker, I would remove Rep. Ilhan Omar from the House Foreign Affairs Committee based on her repeated anti-semitic and anti-American remarks.

Newt Gingrich Sets Adam Schiff Straight: “Nancy Pelosi set the precedent, the Democrats have nothing to complain about because they started this dance”