Elon Musk Calls Out Hollywood ‘Crybaby’ Over Twitter Boycott: “It turns out that Trent “nine inch nails” Reznor is actually a crybaby” 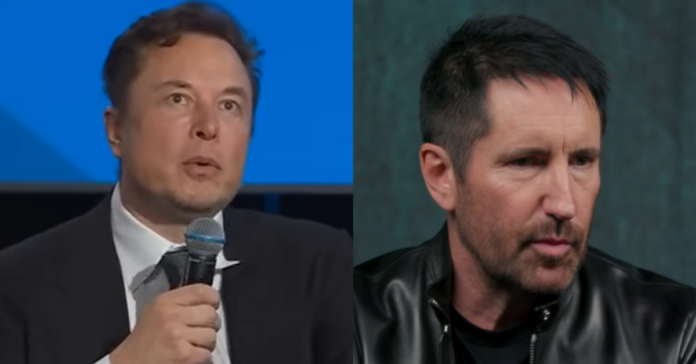 Twitter CEO Elon Musk called out Hollywood crybaby Trent Reznor after the Nine Inch Nails frontman said he would be leaving Twitter. Reznor’s other job is scoring the music on movies including Patriots Day, Waves, The Girl with the Dragon Tattoo, Mank, Gone Girl, Soul, and The Social Network.

Reznor told Billboard about his decision to leave Twitter:  “I’m about to depart. We don’t need the arrogance of the billionaire class to feel like they can just come in and solve everything.

“Even without him involved, I just find that it has become such a toxic environment. For my mental health, I need to tune out. I don’t feel good being there anymore.”

Reznor said earlier about his role scoring the hit movie about Facebook, The Social Network:

“I think the whole aspect of social networking is vulgar and repulsive in a lot of ways. But I also see why it’s appealing – I’ve had that little high you get from posting stuff online.

“But then you think, ‘Did I need to say that?’ I’ve explored that enough to know to stay kind of quiet these days.”

“And it turns out that Trent “nine inch nails” Reznor is actually a crybaby.”

Reznor seems headed for the path of CBS News who had to eat crow after ‘pausing’ Twitter.

“After pausing for much of the weekend to assess the security concerns, CBS News and Stations is resuming its activity on Twitter as we continue to monitor the situation.”

Our love will never die pic.twitter.com/y5SldfAAt0

Newt Gingrich Sets Adam Schiff Straight: “Nancy Pelosi set the precedent, the Democrats have nothing to complain about because they started this dance”

Ron DeSantis Puts Dem Party On Notice: “What the election results in Florida show is that Florida really has a blueprint for success”