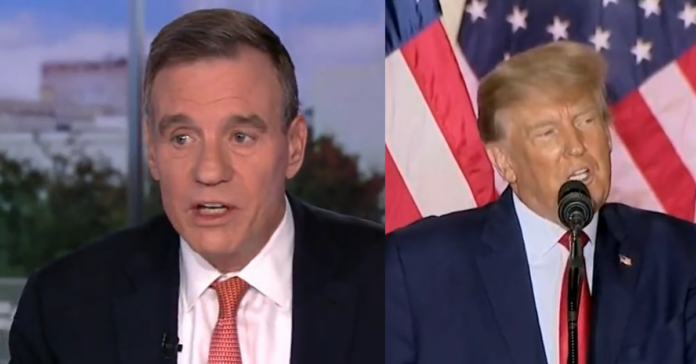 BREAM: Let’s start with TikTok. You also have concerns about this, and you’re also quoted now as saying: As painful as it is for me to say, if Donald Trump was right and we could have taken action then, that’d have been a heck of a lot easier than trying to take action in November of 2022. Did Washington simply not listen because they didn’t like the messenger then? And what can we do now?

WARNER: Well, I think Donald Trump was right. I mean, TikTok is an enormous threat. It’s a threat on two levels. One, it is a massive collector of information, oftentimes of our children. They can visualize even down to your keystrokes.

So, if you’re a parent and you got a kid on TikTok, I would be very, very concerned. All of that data that your child is inputting and receiving is being stored somewhere in Beijing. The idea that we can somehow separate out TikTok from the fact that the actual engineers writing the code in Beijing I think is a — the Justice Department trying to come up with a solution. I’m going to let — I’m going to take a look at that solution, but they got a huge mountain to climb.

If they suddenly want to dial up the fact that we are going to decrease content that criticizes Chinese leadership but increase the content that your kids may be seeing saying, hey, you know, Taiwan really is part of China. That is a distribution model that would make RT or Sputnik or some of the Russian propaganda models pale in comparison.

BREAM: Okay. So, some bipartisan agreement on that.

Let’s talk to you also about the issue of the crown prince in Saudi Arabia. You heard what the senator said about how we characterize the relationship we have with Saudi Arabia. You said back in 2018 when President Trump was in the White House that he failed to hold Saudi Arabia responsible in any meaningful way for the death of Jamal Khashoggi.

So, you heard about what the State Department has essentially done now, saying he should have sovereign immunity. Will you also call out President Biden for not being tougher?

WARNER: Here’s — well, let’s — and, again, I hate to go — so many places where I actually may agree with my friend Tom Cotton.

BREAM: It’s not a bad thing.

WARNER: He and I are on the same — he is on the Intel Committee with me.

The reason why there was a grant of sovereign immunity, even to leaders we don’t like, is as much to protect American leaders and American diplomats when they’re posted abroad from being subject to Saudi Arabian law or Russian law, or South African law. So, this is — this has been historical precedent.

Do I think the murder of Jamal Khashoggi was awful? Absolutely, absolutely. Am I disappointed particularly in the most recent times when Saudi Arabia which used to a bulwark against the Soviet Union for decades on end decided to kind of escape the middle in terms of siding with democracies against Vladimir Putin’s illegal invasion of Ukraine? I’m very disappointed there.

But I also have to — we need to be enough of a realist to realize that Saudi Arabia has been a bulwark against Iran. It is a leader in a very messy part of the world.

And if there are ways we can continue to push the Saudi government, MBS in particular, towards greater reform and willingness to get off the sidelines and stand with democracies against Putin’s war in Ukraine, I think that would be a good thing.

BREAM: Was it unfair then to criticize President Trump for not being tougher on them two or three years ago, and then say, well, the Biden administration is doing what they have to do?

WARNER: Well, look, I think you saw many members with the Trump administration at that point in time call out the Saudi leadership for the brutal murder of Khashoggi. What you didn’t see because of this, you know, strange affinity that President Trump and his family — remember his son has received massive investments from the Saudi investment funds — those still bother me a great deal.

“I think Donald Trump was right. I mean, TikTok is an enormous threat. … So if you’re a parent, and you’ve got a kid on TikTok, I would be very, very concerned.”

Ilhan Omar Responds To Kevin McCarthy’s Promise To Remove Her From Committees, Slams CA Rep: “It does nothing to address inflation, health care or solve the climate crisis”