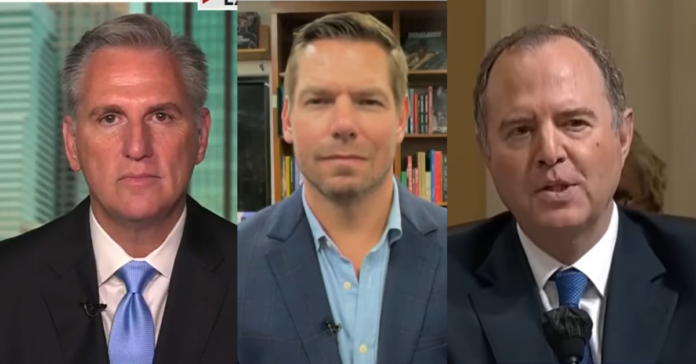 House Minority Leader Kevin McCarthy, R-Calif., put Adam Schiff and Eric Swalwell on notice today on Fox News promising to follow through on his vow to remove them from their congressional committees when Republicans retake control in the new Congress.

McCarthy told Fox News anchor Maria Bartiromo he will keep the promise he made in January to remove  Democratic Reps. Eric Swalwell, Adam Schiff, and Ilhan Omar from their coveted committee assignments. He said he will remove Swalwell and Schiff from the House Intelligence Committee and Omar from the House Foreign Affairs Committee.

“You have Adam Schiff, who lied to the American public time and again.

Kevin McCarthy says on Fox News that as Speaker he plans to prevent Ilhan Omar, Adam Schiff, and Eric Swalwell from serving on committees pic.twitter.com/gekzYBRXSj

“We will not allow him to be on the Intel Committee either.

“Look at Congresswoman Omar, her antisemitic comments that have gone forward.

“We’re not going to allow her to be on Foreign Affairs.

“But we’re also going to stand up to what’s happening, not just in the halls in Congress, but what’s happening to our higher education institutions, the antisemitism that’s going on on these campuses and others.

“We will investigate that as well and stop this to make sure that America does have the freedoms that we said we would keep, and we will stand up to it as we move forward,” he said.

Last year, I promised that when I became Speaker, I would remove Rep. Ilhan Omar from the House Foreign Affairs Committee based on her repeated anti-semitic and anti-American remarks.