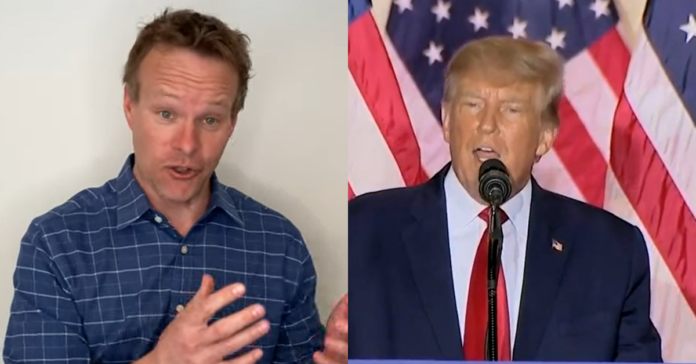 “We have fact-checkers ready to go. We will put things in perspective. We will not let everything he does consume the news cycle, right? There are other things that are important.”

Licht took a swipe at former CNN executive Jeff Zucker who he said had CNN fixated on Trump and “let every little thing that he did consume everything, and so you ended up talking about him for eight hours a day.”

Licht said: “And we’re not going to do that. We’re going to be very clear and take everything on a case-by-case basis about what level of coverage it should be.”

Licht is also cleaning house at CNN and has instituted drastic spending cuts and staff cuts.

“All this together will mean noticeable change to this organization,” Licht said in a memo to employees. “That, by definition, is unsettling.

“These changes will not be easy because they will affect people, budgets, and projects.”

“When we emerge on the other side, CNN will be a stronger, more nimble organization, ready to weather whatever the global economy throws at us and to grow into the future.”

According to the podcast summary:

Chris Licht faces an uphill battle at CNN. He got the CEO gig in the midst of a prickly merger between Warner Bros. and Discovery and right after the shocking exit of beloved long-time boss, Jeff Zucker.

In his first six months, he’s shut down CNN+, ousted Brian Stelter, and shuffled anchors around, including Don Lemon and Jake Tapper.

This week, the network chief held an internal town hall meeting where he faced a staff of thousands and discussed upcoming layoffs. Shortly afterwards, he sat down with Kara — who grilled him, of course.

She asks Licht whether he has any real actual power or if he’s simply executing orders from Warner Bros. Discovery CEO David Zaslav — who is in search of cuts, as the company stares down the barrel at $50 billion in debt — and billionaire board member, John Malone, who has said he’d like to see more “centrist” programming from CNN.

They discuss Licht’s vision for the newsroom, his plan to build trust with journalists who fear losing jobs, and how CNN will cover Donald Trump during the 2024 election.

An interview worth listening to. Chris licht explains to @karaswisher what he’s trying to do w cnn. A long, detailed case for what cnn should be.

Chris Licht is making big changes at CNN, including huge layoffs and a new, more centrist approach to journalism. @karaswisher asks him about these controversial moves and the future of CNN’s newsroom on this episode of #OnWithKaraSwisher https://t.co/gBI2UX6ziI pic.twitter.com/YPL6CHvzl8

Tim Allen Visits ‘My Pal’ Jay Leno In Hospital, Gives Update: “He has severe burns and acts like he just stubbed his toe”

Nancy Pelosi Staffer Accused Of ‘Abusing’ Reporter: “This is not okay, Drew, especially when you're wrong, abuse is not part of the job”