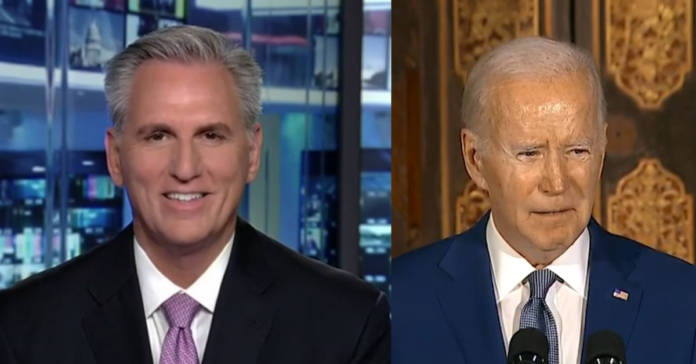 House Minority Leader and the soon-to-be next Speaker of the House Kevin McCarthy (D-CA) went on Sean Hannity’s show on Fox News to detail what the GOP will do the first day they take power.

“That’s exactly right and we will use the power of the purse…the size of our debt has got to stop.”

According to CNBC: “When President Joe Biden recently signed the Inflation Reduction Act into law, he authorized $80 billion in funding for the Internal Revenue Service over the next 10 years. More than $45 billion is earmarked for enforcement — part of an effort to close the estimated $600 billion “tax gap,” the difference between what Americans owe and what they actually pay.…the report says the IRS could add nearly 87,000 new staff — not all of them enforcement agents — in order to “rebuild” and “revitalize” the agency.”

As Speaker—I will take action to fix what Nancy Pelosi so badly broke.

The GOP said in September:

“Republican Leader of the Ways and Means Subcommittee on Trade, Rep. Adrian Smith (R-NE), along with Rep. Michelle Steel (R-CA), introduced a bill to prevent the Internal Revenue Service (IRS) from using its massive, $80 billion infusion of taxpayer dollars to squeeze more revenue out of American taxpayers, by repealing all enforcement funding from Democrats’ inflation act.

“It’s clear the IRS has long lost touch with its mission: to serve taxpayers,” said Rep. Smith. “Democrats’ Inflation Act would result in more audits for those who can least afford it, plain and simple.

“By restricting new funding for the agency to customer service and improving its technology, we are protecting middle-class workers from a supercharged IRS and ensuring that they get the help they need.”

“The so-called ‘Inflation Reduction Act’ certainly hasn’t reduced inflation, but it has cost taxpayers more than $700 billion and doubled the size of the IRS to target middle- and low-income families and small businesses with a flood of audits and draconian ‘enforcement’ activities,” said Rep. Steel.

“The IRS has lost tens of billions of dollars to fraud and mismanagement, and I’m proud to introduce this legislation with Rep. Smith to protect the taxpayers, rein in an unaccountable federal agency, and reverse course from this dangerous path of growing bureaucracy and heavy-handed federal government.”

Nancy Pelosi’s Plans For Future Leak, She Will Step Down From Dem Leadership But Stay In Congress As Backbencher: Report