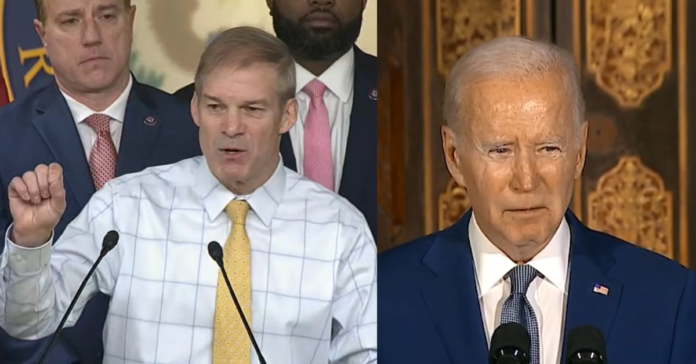 Republican Reps. James Comer and Jim Jordan alleged at a press conference Thursday that President Biden was actively involved in overseas business dealings involving his son Hunter and they vowed to get to the bottom of the Biden family business dealings now that the GOP controls the House.

Comer said whistleblowers have come forward to allege that the Biden family “flourished and became millionaires by simply offering access to the family.”

“This is an investigation of Joe Biden,” Comer said before alleging that Hunter Biden and Joe Biden participated in “waste, fraud, and abuse” in their business dealings.

Rep. @JamesComer: “We find evidence that Hunter Biden and Joe Biden were involved in a scheme to try to get China to buy liquified natural gas.”

“People are in outrage over China buying farmland in the Dakotas. What about China starting to buy into our American energy industry?” pic.twitter.com/KC1oqIw8CE

“First, it wasn’t Hunter’s laptop. Then they admitted it was his laptop, but argued it was Russian “disinformation.”

“Then they admitted it wasn’t disinfo, but assured us Joe Biden wasn’t involved.

“Now, it looks like Joe was involved, but they’re telling us he did nothing wrong.”

“Excellent press conference by @Jim_Jordan & @JamesComer about oversight plans for the new Republican Congress. They are prepared to hold the Biden administration accountable! They have 14 FBI whistleblowers… and it’s not even day one yet!”

One big problem they will have is getting the Department of Justice and the White House to cooperate. They can subpoena whoever they want but if Merrick Garland won’t enforce the subpoenas there can do little about it.

Excellent press conference by @Jim_Jordan & @JamesComer about oversight plans for the new Republican Congress. They are prepared to hold the Biden administration accountable!

They have 14 FBI whistleblowers… and it’s not even day one yet!

Nancy Pelosi’s Plans For Future Leak, She Will Step Down From Dem Leadership But Stay In Congress As Backbencher: Report