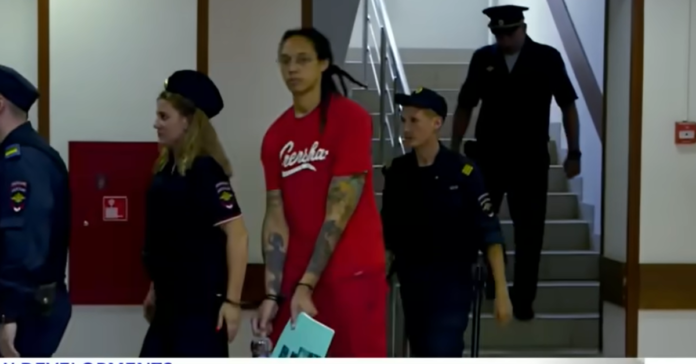 WNBA star Brittney Griner was transferred to a penal colony outside Moscow on Thursday her lawyers said. Griner, 32, has been moved to the IK-2 female penal colony in the small town of Yavas, about 300 miles southeast of Moscow, in the Mordovia region

“Brittney is doing as well as could be expected and trying to stay strong as she adapts to a new environment,” her lawyers Maria Blagovolina and Aleksandr Boikov, said before adding “this is a very challenging period for her.”

Her agent, Lindsay Kagawa Colas, said: “Despite the fact she is alone and now nearing her ninth month in detention separated from her loved ones, she is trying to stay strong.”  The New York Times found a 2017 article by Moskovsky Komsomolets, a Russian newspaper, that described the brutal conditions she faces.

Widespread torture, beatings, and slave labor conditions where Inmates often work from 7 a.m. until midnight or later and are not allowed to use the bathroom.

From 7.00 to 24.00, and sometimes until three in the morning, women work. Whether the convict will be able to go to the toilet, to the dining room, for a walk, to the bathhouse during the day, depends solely on whether she has fulfilled the “norm”.

The convicts take jars and bags with them, in which they relieve themselves without leaving the sewing machine. “Sometimes girls get up, their bladder can’t stand it, they go and urinate under themselves on the go,” says former prisoner Elena Vinnichenko.

I would like to do everything within my limited capacity to help her.

Yes, she did something dumb but her punishment amounts to an unnecessary casualty of this unnecessary war.

She has nothing to do with anything.

The opportunity to go to the bath must also be earned. Vinnichenko says that in December 2016 they were only allowed to bathe once, on December 31st.

The beatings of female prisoners look especially vile. A huge number of complaints come from colony IK-2. We interviewed many former convicts, and they all confirm the violence and torture.

Olga Sh. is 37 years old. Now she lives in Moscow and works as a manicurist, but she dreams of going to medical school. Three years ago, Olga was released from IK-2 in Mordovia, where she spent two years.

“I want to get them all on trial. So that they answer for their crimes,” says Olga about the employees of the colony.

In September 2013, there was a small verbal conflict between her and one of the IK-2 employees. Olga ended up getting punched in the head, stomach, back and buttocks. Then they put her against the wall and began to beat her with an iron stick all over her body until she slid down the wall.

The man who beat Olga told her: “Now I will come to you every day.” And really came and beat. Olga believes that only transfer to another region saved her from death.

It doesn’t matter if you can sew or not. They work even with fingers cut off at the factory.

Former convict Tatyana Zabelina tells the story of her friend: “She worked for two days in a cutting shop, she cut off three fingers on her right hand. She was taken to the hospital. A week later, they brought it and drove it back to the factory to work.”

Tatyana Chepurina was not even 30 years old. Quiet, calm, always restrained. She could not cope with the “norm”, which is why she was forced to work 22 hours a day, was not allowed to use the toilet and the dining room.

On October 23, 2011, she was called an underachiever and severely beaten. In the evening of the same day, Chepurina hanged herself on her own handkerchief.

Tatyana Zabelina worked as a cook in the dining room, she was released six months ago. Now he lives and works in St. Petersburg. To the question “how they feed,” he answers: “It feels like they are bringing dead pigs.

When you cook meat, there is a disgusting smell. Milk is given out only to patients who are prescribed a special diet, but always only sour. But good food is still prepared in the canteen, though not for convicts: “Prosecutors arrive, an order is prepared for them: salads, ducks, liver, rabbit — everything is prepared for the prosecutor. Packed and taken out of the zone.

No more than 20 minutes are allotted for food, then everyone is driven back to the wash. The convicts, knowing that during the day they will no longer be able to eat, try to hide the bread, but if the officers find it, they will definitely beat it.

“Those who are not released from production for a day come to the canteen like zombies – they do not understand what is happening. Women in IK-2 do not live, but survive,” says the former convict, the Russian report said.

Russian authorities have given no information on her whereabouts for nearly two weekshttps://t.co/cb10dRQg2j

Joe Biden Sticks It To US Taxpayers, Trips Home To Delaware Have Cost At Least $11 Million: Report