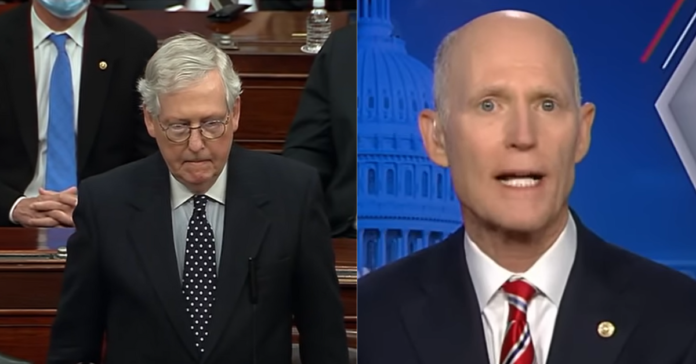 “We collectively I think had a good discussion about what happened in the election and what happens in the next election,” McConnell said. “I’m grateful for the opportunity to continue to serve.”

He said earlier: “Every one of our candidates knew what they were for, expressed it quite clearly.

Mitch McConnell is reelected as Minority Leader in a secret ballot vote — 10 Senate Republicans voted against him, and one voted present, per a person in the room

“It’s pretty obvious, and all of you have been writing about it, what happened. We underperformed among independents and moderates because their impression of many of the people in our party in leadership roles is that they’re involved in chaos, negativity, excessive attacks, and it frightened independent and moderate Republican voters,”

“I think Rick Scott would be much better than McConnell. I know McConnell well. I guess probably better than most.

“I’m not a fan of McConnell and I am a fan of Rick Scott, and you have others in there that would be very good.”

Sen. John Barrasso of Wyoming was reelected as conference chair.

Sen. Steve Daines of Montana was elected to replace Scott as chairman of the National Republican Senatorial Committee (NRSC).

Scott wrote a letter to his fellow GOP Senators asking for their vote: “I believe it’s time for the Senate Republican Conference to be far more bold and resolute that we have been in the past. We must start saying what we are for, not just what we are against.

“I understand that I won’t gain the support of every member of our Conference, but we all have a clear choice to make.

“If you simply want to stick with the status quo, don’t vote for me.

“If elected Leader, I promise you the following:

I will always remember you elected me, and I will work with each of you to

I will work tirelessly to help elect all Republican Senators, whether they are likely to support me or not.

I will never surprise you with legislation and ask that you vote on something you haven’t had an opportunity to review.

I will always work to be transparent with each of you and to bring the conference together.

I will work with each of you to advance Republican priorities and, when possible, force Democrats to vote on our bills.

I will lead the conference in developing a positive, aspirational agenda that outlines our legislative goals and what Senate Republicans stand for.

I will engage with the Republican House to pass Republican priorities.

I will never pressure you to vote in a way that is counter to what you campaigned on or not in the best interests of your state.

I humbly ask for your vote as your next Republican Leader.”

What’s the point of voting for these people just to stab us in the back the moment they get in?

Mike Pence Snubs Donald Trump On Fox News: “I don’t think anyone could have beaten Hillary Clinton other than Donald Trump in 2016, but I honestly believe that we’ll have better choices come 2024”

Trump Puts DC Establishment On Notice: “I will push for a constitutional amendment to impose term limits on members of Congress”