Mike Pence Snubs Donald Trump On Fox News: “I don’t think anyone could have beaten Hillary Clinton other than Donald Trump in 2016, but I honestly believe that we’ll have better choices come 2024” 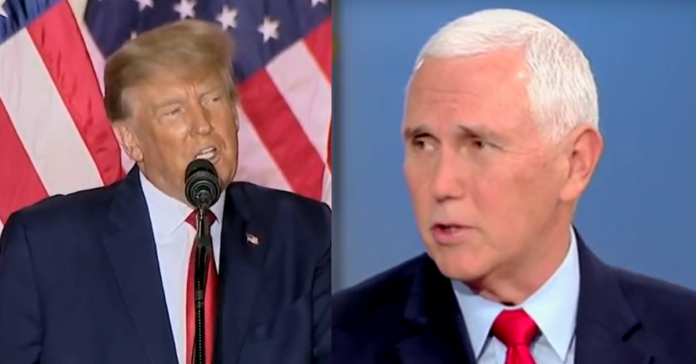 Former Vice President Mike Pence snubbed his old boss former President Donald Trump when asked about Trump’s 2024 presidential run. Pence went on Fox and Friends to promote his new book, “So Help Me God,” when he took a few swipes at Trump.

DOOCY: “Mr. Vice President, so many Republicans had urged the former president, your running mate, wait until after Georgia. Because they want that Senate seat in Republican hands. He did not. Any idea why?”

PENCE: “Well, that’d be a good question for him, Steve. I couldn’t be more excited about the fact that House Republicans are going to secure a majority. Kevin McCarthy is going to be the next Speaker of the House. And — and I’m anxious to see Herschel Walker, although it won’t be a majority in the Senate, I’m anxious to see Herschel Walker be elected in that special election in Georgia.

“And I think the American people are really focused there.

“But it’s a free country.

“The president’s entitled to announce his intentions whenever he desires, but I honestly believe that we’ll have better choices come 2024.

“You know, I don’t think anybody could have —“

PENCE: “I do. I don’t think anyone could have beaten Hillary Clinton other than Donald Trump in 2016. I write that in my new book.”

PENCE: “I learned that on the campaign trail with him in 2016.

“And the record that we created that I know he reflected on last night, where we rebuild our military, revived our economy, secured our border, appointed conservatives to our courts at every level, is something that I’ll always be proud of.

“But as I’ve traveled around the country, over the last two years, people have repeatedly come up to me and said, you know, we want to get back to the policies of the Trump-Pence administration.

“But I think there’s a genuine desire for leadership that could unite the country around our highest ideals, and — and leadership that would reflect I think, more of the civility and respect that Americans show each other every day.

“You know, I’m out of politics now, and once you — once you get out of politics, and we move back to Indiana, you realize the American people actually get along pretty well most days.

“I just think — I think I have a sense the American people want to — want a new style of leadership that’ll — that’ll reflect the way they deal with one another every day.”

It was a great privilege for me to write my story in “So Help Me God.”

BREAKING: Mike Pence announces he is considering a 2024 run against Trump https://t.co/jiOKzg6ya0