Marjorie Taylor Greene: ‘Dems Are Scurrying Around Looking For Sellout Republicans Who Will Join Them To Make Liz Cheney Speaker’ 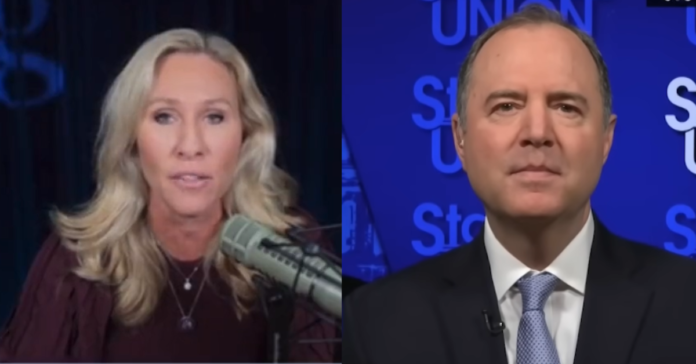 Representative Marjorie Taylor Greene warned Republicans about Democrat’s plan to take advantage of the slim majority the GOP will have in the House and place a Pelosi-approved person as the new Speaker.

Greene said for that reason she is supporting Kevin McCarthy as Speaker. If the GOP can’t agree on a choice, she fears the Dems will pick off a few GOP members and put Liz Cheney in as House Speaker. Greene said:

“We cannot open the door to what the Democrats are doing right now, and that is scurrying all the way around looking for any weak RINO sellout Republicans that will join them. That is what’s happening right now, and I find that terrifying.

“There is no way in hell I’m going to vote to hand that gavel to Liz Cheney or anyone else Nancy Pelosi wants.

“We’re looking at having a very razor-thin majority with potentially 219.

“We are talking about one vote.

“We have already been through two years where we saw Republicans—Liz Cheney and Adam Kinzinger—cross over and join the Democrats.

“Here’s the harsh reality, there are Republicans in our conference right now that would make a deal with the Democrats and cross over.

“He already has the vote,” she said of McCarthy.

Rep. Ruben Gallego (D-AZ) floated the idea of working with the GOP on social media: “Just cut a deal with the Dems Kevin. Whatever you get from Freedom Caucus will not be worth it. The odds will be good but the goods will be odd.”

The Washington Examiner spoke to other Dem Reps about crossing the aisle and working with Kevin or someone else in the GOP to make them Speaker.

“Won’t know that until the dust settles, the margin is determined, and how badly McCarthy needs some Dem support. Anything is possible,” one said. “Close only counts in horseshoes and hand grenades, not in speakership races.”

Another said: “If he asks, it could be a possibility.

Another Dem said making a deal to put Kevin in the job would be preferable to having someone like Majorie Taylor Greene or Jim Jordan as Speaker.

“I doubt it, but I guess if the alternative is Rep. Marjorie Taylor Greene (R-GA), it could be possible. I think it’d be more about the alternative than anything he could give.”

One centrist Dems then floated a plan the Dems are whispering about behind the scenes – put Liz Cheney in as Speaker to get the ultimate revenge on Trump.

The Dem Rep said: “Under no circumstances would just about any Dem ever vote for someone who has downplayed Jan. 6.

“I’m one of the most bipartisan people in the place, and the thought of supporting Kevin makes me laugh.

“It’s an insane proposition to consider supporting someone like him.

“I would never do that.

“No Dem with principles and a belief in democracy would ever do that.”

“I would classify them as serious in intent to put forth a principled option with the goal of bringing people together but not serious in that I can’t imagine that getting to 218,” the Rep said.

Pro-Life Group Reacts To Trump’s Announcement: "President Trump raised the bar for what it means to be a pro-life presidential candidate and president”