Judge Throws Book At BLM Rioter Who Firebombed NYPD Vehicle, Sentences Her To 72 Months In Prison 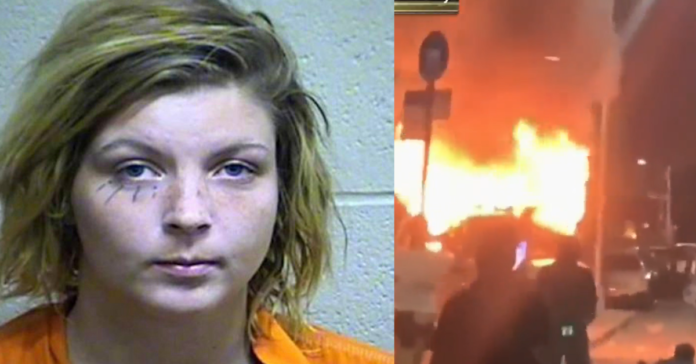 A federal judge threw the book at a BLM rioter who threw a molotov cocktail at a police car during the George Floyd riots. Samantha Shader was sentenced by United States District Judge Dora L. Irizarry to 72 months imprisonment for using an improvised incendiary device in an attempt to set fire to a New York City Police Department (NYPD) van occupied by four police officers in Brooklyn on the night of May 29, 2020.

Shader said: “I want to apologize to everybody. I want to apologize to the police…I apologize to my family/ I wish I could take this back. What I did was wrong and disrespectful. I hope you can forgive me. And everyone else there. I have no excuse for what I did. So I’m not gonna try to make any. I am grateful for where I am right now in life.”

Judge Dora Irizarry said what she did could have been “catastrophic. Not just the lives of the four officers were at risk but also the protestors. The vehicle had gasoline. It could have exploded.“

Shader pleaded guilty to the charge in April 2022.

Breon Peace, United States Attorney for the Eastern District of New York said: “The constitutionally protected right to peaceful protest is a core democratic value. Over the course of this nation’s history, protests have led to significant positive changes.

“But, throwing a potentially lethal device at an NYPD van occupied by four officers during a protest was an unacceptable and dangerous act, which put the officers and others present at risk.

“This Office is committed to holding accountable those who, like this defendant, commit crimes that endanger the community and the lives of the dedicated officers of the NYPD.”

“Today, Ms. Shader learned the consequences for choosing to engage in violent criminal actions.  Malicious actors who wish to bring mayhem to our community – and those who dutifully serve to protect it – will be held accountable for their behavior by the FBI and our law enforcement partners,” said FBI Assistant Director-in-Charge Michael J. Driscoll.

“A violent criminal who crossed a line that is critical to a lawful, civil society has been appropriately held to account,” stated NYPD Commissioner Keechant L. Sewell.

“Today’s sentencing sends a clear message that no one may ever commit a despicable act of vandalism, especially one that endangers the lives of police officers – whose mission is to ensure people’s right to demonstrate peacefully. I commend the NYPD officers who arrested her for this criminal act, and I thank the U.S. Attorney for the Eastern District for taking the safety of all New Yorkers – including the police who serve them – seriously.”

On May 29, 2020, Shader traveled from her residence in Saugerties, New York to Brooklyn to participate in a march planned to protest the murder of George Floyd by Minneapolis police officers.  Before traveling to Brooklyn, Shader invited co-conspirator Timothy Amerman to “go down to the City to cause some hell,” and after he declined, procured from him numerous glass bottles that Amerman believed Shader would use as projectiles against police and counter-protesters.

On the night of May 29, 2020, amid a large protest march near the Brooklyn Museum, a witness used his phone to record a video of Shader lighting the wick of a Molotov cocktail and throwing it at a marked NYPD van occupied by four police officers who were assigned to crowd control during the protests.

As she threw the Molotov cocktail, Shader called out to the protesters around the van to “GET OUT THE MOTHERF—ING WAY!”  The Molotov cocktail struck the NYPD van, shattering two of its windows, but did not break and ignite.

Following Shader’s arrest, the FBI identified Saugerties, New York resident Amerman as the man who had provided glass bottles to Shader and arrested him on July 3, 2020.  Amerman pleaded guilty to one count of conspiracy to commit civil disorder on March 26, 2021, and is awaiting sentencing.  He faces a maximum term of 60 months’ imprisonment.

The government’s case is being handled by the Office’s National Security and Cybercrime Section.  Assistant United States Attorneys Ian C. Richardson and Jonathan Algor are in charge of the prosecution.

Pro-Life Group Reacts To Trump’s Announcement: "President Trump raised the bar for what it means to be a pro-life presidential candidate and president”

Elon Musk Gives Ultimatum To All Twitter Employees: Work 'Long Hours at High Intensity' Or Get Out