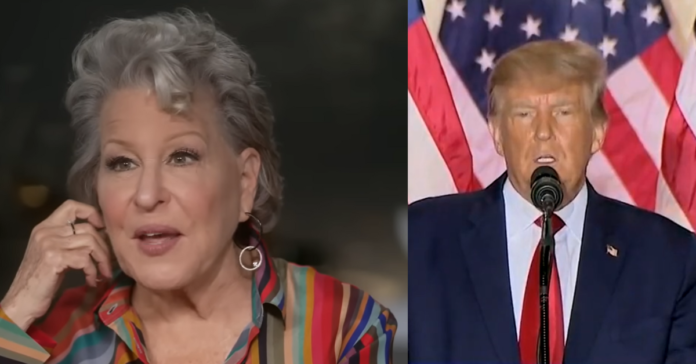 Hollywood star Bette Midler is not happy former President Donald Trump is running for the White House again. She took to social media to voice her displeasure with the news saying it made her sick.

She said after Trump made his announcement from the ballroom at Mar-a-Lago: “Excuse me. I’m going to be sick.” She added, “He just handed us two more years of his #delusions and #drivel. #unbearable.”

She said when the New York Post took a few swipes at Trump in what many are calling a Rupert Murdoch vs. Donald Trump feud: “I’m getting goosebumps! I may have to subscribe!”

Elise Stefanik said: “I fully support him running again. Under his presidency, America was strong at home and abroad, our economy was red hot, our border was secure, our neighborhoods were safe, our law enforcement was respected, and our enemies feared us.”

Jim Jordan said: “President Trump did more of what he said he’d do than any President in our lifetime. Period.”

Excuse me. I’m going to be sick.

Trump said: “Ladies and gentlemen, distinguished guests, and my fellow citizens, America’s comeback starts right now. I am running because I believe the world has not yet seen the true glory of what this nation can be.

“We have not reached that pinnacle. Believe it or not. In fact, we can go very far. We’re going to have to go far first. We have to get out of this ditch.

“The Washington establishment wants to silence us, but we will not let them do that.

He just handed us two more years of his #delusions and #drivel. #unbearable