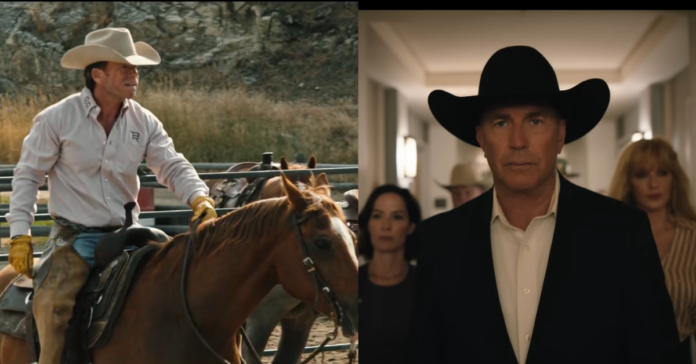 The hit anti-woke show Yelloswtine did it again and set another ratings record for its fifth season premiere. The Paramount Network drama delivered 12.1 million live-plus-same-day viewers making it the biggest debut for the Kevin Costner Western and making Yellowstone the top scripted series premiere of 2022.

“After four seasons, the show’s massive audience base continues to impress with its latest season premiere becoming the most watched scripted television premiere of 2022,” said Ashwin Navin, co-founder and CEO, Samba TV.

“Yellowstone continues to tap into the passions of a broad swath of viewers throughout the American Midwest hungry for Western-themed genres that have been largely underrepresented on television in recent years.

“Viewership significantly over-indexed for the season premiere within cities such as St. Louis, Cleveland and Pittsburgh and not surprisingly under-indexed in the largely coastal urban centers of San Francisco, Los Angeles and New York.”

The ratings are in, and it seems the Duttons are more popular than ever in ‘Yellowstone’ season 5. https://t.co/1Iv7f4NiVQ

According to The Hollywood Reporter:

“The breakdown goes like this: Yellowstone wrestled up 8.8 million viewers in its first airing on the Paramount Network (up 10 percent from season four).

“That number grew to 10.3 million viewers when adding in simulcast airings on CMT, TV Land and Pop. Then the figure climbed to 12.1 million when adding in encore telecasts.”

Yellowstone was the most-watched show outside of the National Football League last year with viewers under the age of 50, beating out all broadcast network series despite airing on the Paramount Network.

Tulsi Gabbard Lands New Job At Fox News, Slams Joe Biden: “Instead of delivering a necessary message of unity to all Americans, President Biden chose to attack half the country once again”