Tulsi Gabbard Lands New Job At Fox News, Slams Joe Biden: “Instead of delivering a necessary message of unity to all Americans, President Biden chose to attack half the country once again” 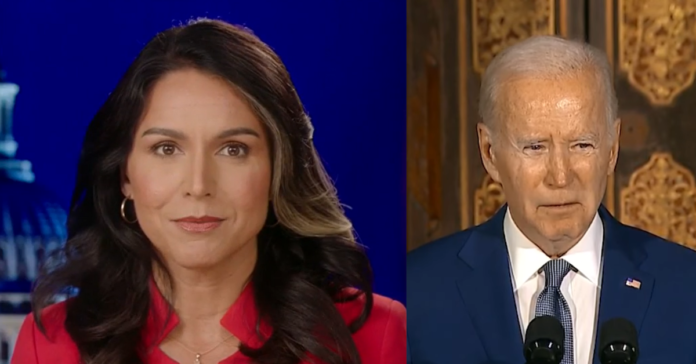 After telling the Democratic Party to go pound sand, former Rep. Tulsi Gabbard of Hawaii is joining Fox News as a paid contributor. A representative for Fox News confirmed to The Los Angeles Times that Gabbard signed a deal Monday and will start appearing on its programs next week.

Gabbard, 41, ran for the 2020 Democratic nomination for president and destroyed Kamala Harris in a debate so badly the VP dropped out of the race soon after. Since then Gabbard has been calling out the Dems over their incompetence and horrible policies.

Gabbard is a military veteran who served in Iraq as a member of the Hawaii Army National Guard. Gabbard represented Hawaii’s second congressional district from 2013 to 2021.

With the Republicans all but certain to win the House, Gabbard offered some advice to the newly divided Congress and took a swipe at Biden.

“Unfortunately, while in Bali today, instead of delivering a necessary message of unity to all Americans, President Biden chose to attack half the country once again, implying that the only acceptable Democratic outcome is a win for the Democratic Party.

“Here are a few ways where Congress should make a start and first and foremost, we must secure our borders. We have to use the power of the purse to close the border and make it crystal clear that if you’ve come into this country illegally through Biden’s open door, you’ve got to go back to wherever you came from.

“If you want to come back into our country, you’ve got to follow our laws and just a few weeks ago, I was in McAllen, Texas, southernmost border, the busiest spot of the southern border for illegal crossings, where Congresswoman Maya Flores and her husband, a Customs and Border Patrol agent, we walked around and they showed me one of the spots where there’s this huge gap in the border wall.

“Later, as we were driving out, we saw piles and piles of building materials that were purchased for the wall stacked on the side of the road, unused, things that we already paid for.

“I asked, why aren’t they being used?

“Well, the Biden administration won’t allow continued construction of the wall, but they also won’t allow the governor of Texas to use those materials again that we already bought to secure their own border. Unfortunately, what’s happening in McAllen is occurring all along the southern border.

In Normandy, Texas, early Wednesday morning, a massive group of migrants crosses illegally into this tiny town on the outskirts of Eagle Pass. Hundreds of them escorted by the Texas National Guard and Border Patrol in a single file line, stretching almost as far as the eye can see.

The migrants are predominantly from countries that Title 42, a policy that allows authorities to expel migrants on the basis of public health, is rarely enforced on, meaning they won’t be expelled to Mexico. At the same time, another group of 400 crossed illegally into Eagle Pass, most of them single adult men.

“Over the weekend, the White House forced the resignation of the commissioner of U.S. Customs and Border Protection, Chris Magnus, but let’s be honest here, what this really was.

“It was an effort to shift blame away from those in power who are the ones responsible for over 2 million people illegally entering our country through the southern border: the president, the vice president and Secretary Mayorkas.

“We can’t let them get away with this. So, the question is: is the Biden administration really going to actually change its policy and make it clear to people around the world that anyone who comes into this country illegally is going to be sent immediately back to where they came from?

“Honestly, I don’t have much faith that this is going to happen because if it were, they would have already done it.

“There is nothing more important in this country than protecting our God given rights enshrined in the Constitution. These very freedoms and civil liberties, however, are under attack. They have been for quite some time.

“This new Congress coming in must take this promise that they make when they take their oath of office seriously to support and defend the Constitution of the United States and actually work together to protect our civil liberties and end the gross overreach of government.

“Get rid of provisions like those in the Patriot Act that allow for secret FISA courts, that allow for warrantless wiretapping of Americans, allow for a no-fly list that has no due process, the use of the Espionage Act to go after political dissidents and more.

“They need to exercise their oversight authority to stop this administration’s efforts to undermine our freedom of speech and silencing political opponents by politicizing agencies like the Department of Justice and FBI to go after them and by getting Big Tech and social media to censor voices that they don’t want to hear.

“A recent lawsuit by the states of Missouri and Louisiana have uncovered troubling evidence that this censorship is occurring. Twitter even scheduled a meeting to debrief top White House officials on “vaccine misinformation.” Twitter then censored that “misinformation,” some of which later turned out to be true,” she said.

Lauren Boebert Puts Nancy Pelosi Out To Pasture: "Waiting this long for election results is going to make firing Nancy Pelosi as Speaker of the House that much sweeter”