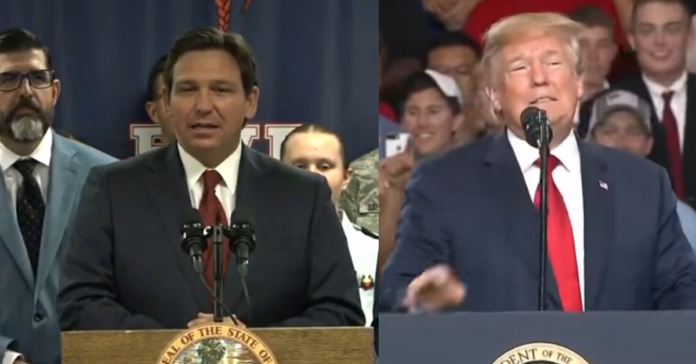 Florida Governor Ron DeSantis (R) to the recent attacks from former President Donald Trump by taking a veiled swipe at his one-time mentor.

A reporter asked DeSantis today:  “So we would like to know what you think about Trump’s big announcement and some of the less than flattering comments he has made about you.”

DeSantis took a few swipes at the corporate media and smartly avoided mentioning Trump by name but the message was clear. Ron said:

“Well, you know, one of the things I’ve learned, like learn in this job is when you’re do, when you’re leading, when you’re getting, getting things done, yeah, you take incoming fire.

“That’s just the nature of it. I roll out of bed in the morning. I’ve got corporate media outlets that have a spasm.

“Just the fact that I’m getting up in the morning.

“And it’s constantly attacking and this is just what’s happened.

“I don’t think any governor got attacked more, particularly by corporate media, than me over my four-year term.

“And yet I think what you, what you learn is all that’s just noise.

“And really what matters is, are you leading?

“Are you getting in front of issues?

“Are you delivering results for people and are you standing up for folks?

“And if you do that, then none of that stuff matters.

“And that’s what we’ve done.

“We focused on results and leadership.

“And, you know, at the end of the day, I would just tell people to go check out the scoreboard from last Tuesday night.