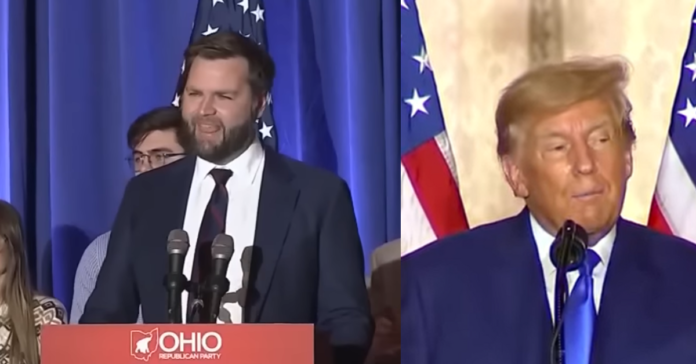 J.D. Vance overruled the talking heads in the media and said former President Donald Trump is not to blame for the GOP underperforming in the midterms. Vance, fresh off winning his Senate race in Ohio, wrote an op-ed for The American Conservative where he said the GOP needs Trump now more than ever.

Vance wrote: “In the long term, the way to solve this is to build a turnout machine, not gripe at the former president. But building a turnout machine without organized labor and amid declining church attendance is no small thing.

“Our party has one major asset, contra conventional wisdom, to rally these voters: President Donald Trump. Now, more than ever, our party needs President Trump’s leadership to turn these voters out and suffers for his absence from the stage.

“The point is not that Trump is perfect. I personally would have preferred an endorsement of Lou Barletta over Mastriano in the Pennsylvania governor’s race, for example.

“But any effort to pin blame on Trump, and not on money and turnout, isn’t just wrong. It distracts from the actual issues we need to solve as a party over the long term.

“Indeed, one of the biggest changes I would like to see from Trump’s political organization—whether he runs for president or not—is to use their incredible small dollar fundraising machine for Trump-aligned candidates, which it appears he has begun doing to assist Herschel Walker in his Senate runoff.

“Blaming Trump isn’t just wrong on the facts, it is counterproductive.

“Any autopsy of Republican underperformance ought to focus on how to close the national money gap, and how to turn out less engaged Republicans during midterm elections.

“These are the problems we have, and rather than blaming everyone else, it’s time for party leaders to admit we have these problems and work to solve them.

“But then the results rolled in, and it was clear the outcome was far more disappointing than hoped. And every person claiming victory on Tuesday morning knew exactly who to blame on Tuesday night: Donald J. Trump.

“Of course, no man is above criticism. But the quick turn from gobbling up credit to vomiting blame suggests there is very little analysis at work. So let’s try some of that.

“Let’s start with an obvious caveat: there is a lot we don’t know. Precinct level data is still outstanding in most states, and exit polls are notoriously finicky. Votes are still being counted out west. We’re still ignorant about a lot.

“But any effort to blame Trump—or McConnell for that matter—ignores a major structural advantage for Democrats: money. Money is how candidates fund the all-important advertising that reaches swing voters, and it’s how candidates fund turnout operations. And in every marquee national race, Republicans got crushed financially.

“The reason is ActBlue. ActBlue is the Democrats’ national fundraising platform, where 21 million individual donors shovel small donations into every marquee national race. ActBlue is why my opponent ran nonstop ads about how much he “agreed with Trump” during the summer. It is why John Fetterman was able to raise $75 million for his election.

“If and when I run for reelection, almost all of it will go directly to my campaign. Democrats don’t have this problem. They raise more money from more donors, with lower overhead.

“Outside groups, like SLF, try to close this gap. But it is a losing proposition. Under federal elections law, campaigns pay way less for advertising than outside “Super PACs.” In some states, $10 million from an outside group is less efficient than $2 million spent by a campaign. So long as Republicans lose so badly in the small dollar fundraising game, Democrats will have a massive structural advantage.

“Importantly, because ActBlue diverts resources to competitive races, this structural advantage can be magnified. Let’s look at how this played out specifically. At first blush, Ron DeSantis and Brian Kemp are similar figures: they both won close elections in 2018, and both cruised to reelection in 2022.

“They are both popular, effective governors from the South. But one won by over 20, and one by 8 (still an impressive margin). What explains this? Money. Look at the fundraising totals: Ron DeSantis outraised Charlie Crist about 7:1. Kemp was actually outraised, albeit barely, by Stacey Abrams. Money, of course, is not dispositive—Kemp won convincingly—but it has a major effect.

“In both cases, incumbency provided a major advantage, in part because it’s easier to raise money when you’ve already won. But incumbency is also powerful in and of itself.

“Just look to Iowa, where incumbent governor Kim Reynolds cruised to reelection by a 20 point-margin, while newcomer Republican A.G. candidate Brenna Bird won by less than one point against twenty-eight-year incumbent Democrat Tom Miller,” he wrote.