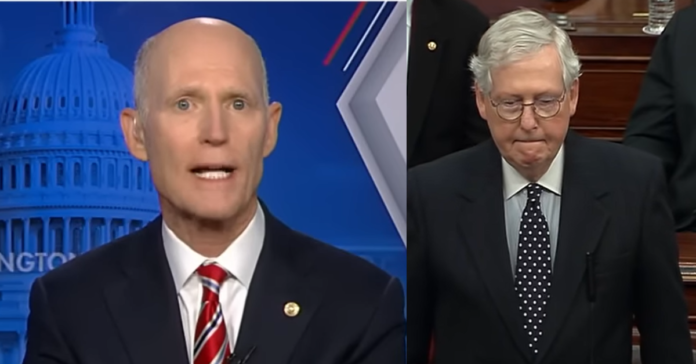 Scott wrote a letter to his fellow GOP Senators that said: “I believe it’s time for the Senate Republican Conference to be far more bold and resolute that we have been in the past. We must start saying what we are for, not just what we are against.

He promised  “to always work to be transparent with each of you and to bring the conference together” and to “lead the conference in developing a positive, aspirational agenda that outlines our legislative goals and what Senate Republicans stand for.”

“I understand that I won’t gain the support of every member of our Conference, but we all have a clear choice to make.

Sen. Rick Scott and GOP Leader Mitch McConnell engaged in a tense back-and-forth where they criticized each other as the two men addressed Senate Republicans in a tense three-hour meeting, according to multiple senators.

“If you simply want to stick with the status quo, don’t vote for me.

“For those who want to get serious about ending reckless government spending and the devastating inflation it has caused, finally take action to protect Social Security and Medicare and preserve the promise of these programs for our children and grandchildren, hold government accountable from the FBI to the IRS, truly combat the extreme danger posed by Communist China and refocus our military on lethal defense instead of woke nonsense, I ask for your support in changing the direction of the Senate and rescuing America from the dangerous path Democrats have set it on.

“I look forward to having the opportunity to meet with each of you to discuss your priorities and collaborate on how we can achieve this vision.

“Regardless of who we choose to be Republican Leader, I believe that we should treat this as a job interview and demand anyone running for a position of leadership in our conference to be transparent and explain why they deserve our support.

“If elected Leader, I promise you the following:

I will always remember you elected me, and I will work with each of you to

I will work tirelessly to help elect all Republican Senators, whether they are likely to support me or not.

I will never surprise you with legislation and ask that you vote on something you haven’t had an opportunity to review.

I will always work to be transparent with each of you and to bring the conference together.

I will work with each of you to advance Republican priorities and, when possible, force Democrats to vote on our bills.

I will lead the conference in developing a positive, aspirational agenda that outlines our legislative goals and what Senate Republicans stand for.

I will engage with the Republican House to pass Republican priorities.

I will never pressure you to vote in a way that is counter to what you campaigned on or not in the best interests of your state.

I humbly ask for your vote as your next Republican Leader.

“Senator Scott disagrees with the approach that Mitch has taken in this election and for the last couple of years, and he made that clear and Senator McConnell criticized Senator Scott’s management of the NRSC,” Sen. Josh Hawley told us

McConnell says he has the votes and the only question is whether they do it sooner rather than later. Scott usually attends these leadership pressers. But he’s not here

Marjorie Taylor Greene: ‘Dems Are Scurrying Around Looking For Sellout Republicans Who Will Join Them To Make Liz Cheney Speaker’