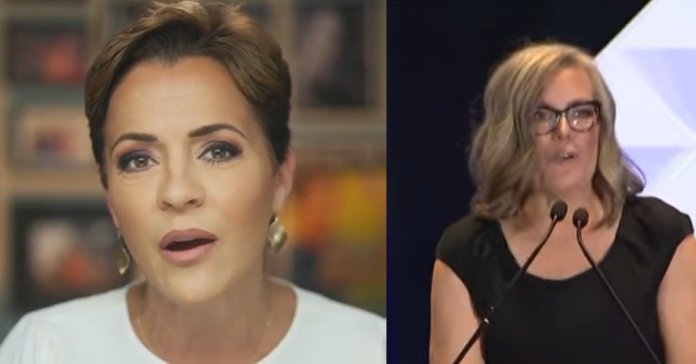 When Stacey Abrams lost her first race against Brian Kemp, Kemp was the Secretary of State in Georgia. Stacey and the Dems demanded he recuse from running the election. The same thing is happening in reverse in Arizona but the Dems are eerily quiet now.

But Republican Arizona gubernatorial candidate Kari Lake is not and slammed her Democratic opponent for not recusing herself as Arizona’s chief election officer as the counting of the ballots comes to an end.

Lake is currently down by 26,011 votes, a 50.5%-49.5% margin, to Democrat Katie Hobbs, Arizona’s secretary of state. Lake can still win but she will need to overperform on the remaining ballots. The GOP flipped a key Dem seat earlier when Republican Eli Crane beat Rep. Tom O’Halleran (D) in Arizona’s 2nd Congressional District.

Lake said: “We called for her to recuse herself in July of last year of 2021, right after we got into the race, recognizing that there’s a major ethical problem there.

We are united as one team with poll observers and attorneys working throughout Arizona to verify procedures are being followed properly. The @GOP and @AZGOP are all-in this effort to support our Republican candidates. https://t.co/7dYORx81RB

“Obviously, just the optics of it looks bad. And she didn’t do that.

“Even though many people been calling for her to recuse herself, it creates problems to say the least.

“She will be the one that would certify the election. She has a lot to do with registration, voter registration, all kinds of things, voter rolls and advising counties on how many ballots they’ll need.

“We have election season here.

“We start voting about a month before Election Day, and we keep counting after Election Day — forever. “And we’re in the process of still counting the votes and there are about 300,000 ballots that have not been counted, this is according to the county recorder.

“Many of them in Maricopa County, and they are from heavy, very heavy, Republican areas.

“So, we’re waiting for the vote to be counted,” she said.

We have teams of people in each county chasing ballot cures ! Every vote counts! https://t.co/N41XTKNlNe

NBC Says Nancy Pelosi’s Reign As Speaker Is Over, Projects GOP Will Win The House 219 to 216