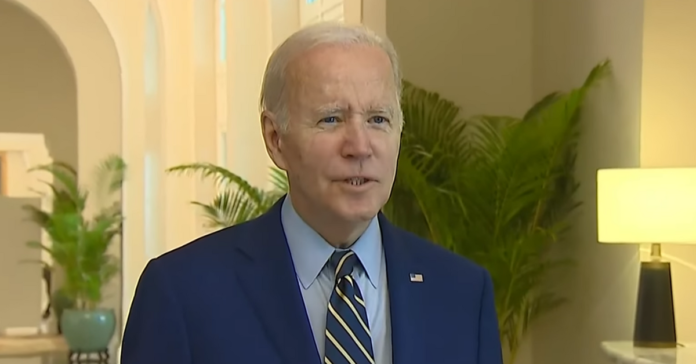 President Joe Biden threw in the towel and said he thinks the Republican Party will win control of the House of Representatives. This means Biden, his administration, and his family will face numerous investigations.

Asked at a press conference in Bali, Indonesia, Joe was asked what Congress can do on the abortion issue and Biden said: “I don’t think they can expect much of anything other than we’re going to maintain our positions.

NBC News agreed and are now projecting the Dems will fall short in the House with Republicans holding 219 congressional seats to the Democrats’ 216.

Minority Leader Kevin McCarthy is not guaranteed the job as House speaker though.

“McCarthy doesn’t have 218 and there will be an alternative challenger,” a spokesman for Rep. Andy Biggs, R-Ariz., told Fox News.

“Many of us feel like there’s this illusion of representative government that our citizens have that’s not realistic,” said House Freedom Caucus Chairman Scott Perry, R-Pa. There is “this top-down driven program here in Washington, D.C., where leadership calls all the shots, and you just vote on the floor not having been involved in any of the conversations.”

Hallie Jackson delivered NBC News’ latest projection that Republicans will take control of the House of Representatives, but just barely as they eke out a majority.

Jackson provided her analysis on Monday as Democrats and Republicans observe the fallout from the GOP’s disappointing midterm election results.

Democrats were able to maintain their hold over the U.S. Senate, so Jackson began by explaining how it’s an open question whether voters will turn out in Georgia again as the contest between Raphael Warnock (D) and Herschel Walker (R) heads into a run-off.

From there, Jackson and Savannah Guthrie turned their attention toward NBC News’ estimation that after the votes are counted, the House will end up with Republicans holding 219 congressional seats to the Democrats’ 216.

Some members of the pro-Trump Freedom Caucus weigh a two-step plan that’s designed to topple him.

If McCarthy doesn’t agree, they plan to nominate Rep. Andy Biggs (R-Ariz.) as an internal pick for speaker to demonstrate that the Californian doesn’t have the 218 GOP votes he needs when the full chamber votes on Jan. 3, according to a Republican with knowledge of the plan who spoke candidly on condition of anonymity.

Depending on how that first step plays out, more conservatives would then embrace an alternative pick to put forward as a consensus candidate, added this Republican — who said some signs are pointing to Rep. Jim Jordan (R-Ohio) as the Freedom Caucus’ consensus choice. CNN first reported the prospect that Biggs would be a symbolic alternative in step one of the plan.

It’s a risky gambit that’s clearly still in flux as the conference churns toward a leadership election that conservatives want to delay, a sentiment aired by Rep. Chip Roy (R-Texas) on Twitter on Sunday night.

And it’s not clear how much McCarthy’s rival-turned-ally Jordan knows about the right flank’s plan, although though outside supporters aren’t hiding their views on the matter.

NEW: @NBCNews projects that Republicans will win control of the House of Representatives:

NBC Says Nancy Pelosi’s Reign As Speaker Is Over, Projects GOP Will Win The House 219 to 216