Dem Rep Jaime Raskin Gets Nervous, Says Trump Could Be Next Speaker Of House If GOP Holds On: “They are talking about putting Trump right there” 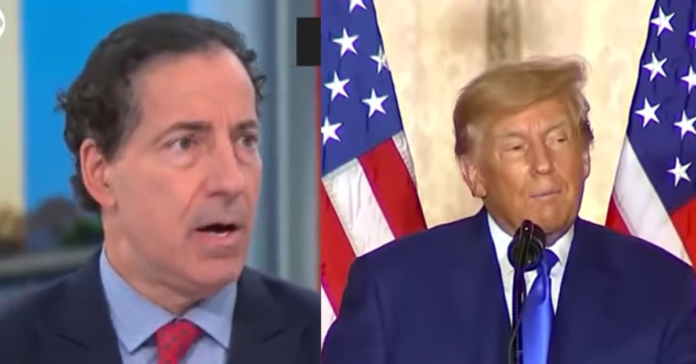 Rep. Jamie Raskin (D-MD) went on CBS’ Face The Nation with host Margaret Brennan to say former President Donald Trump could be Speaker of The House after the results are final as the GOP is slated to win control by a handful of votes.

Raskin said: “One potential candidate whose name has been floated is Donald Trump himself, because the Speaker of the House does not have to be a member of the House. And they are talking about putting Trump right there.

“That’s not a real option, though,” Brennan said before Raskin cut her off. “They talk about it repeatedly,” Raskin said. “And if Trump decided he wanted to do it, it would pose a profound problem for their party because they refuse to do the right thing.”

MARGARET BRENNAN: Yes, it’s going to be hard to legislate though, any way we look at it.

I want to ask you about what you’re working on with the January 6 Committee. Former President Trump’s basically going to defy the subpoena you issued. He’s planning to announce he’s running for the presidency on Tuesday.

Is the prime achievement of the January 6 Committee simply going to be this written report? You’re not appearing to stop him from running.

REPRESENTATIVE JAMIE RASKIN: Well, in a democracy, the people have the right to the truth.

And what we withstood was a systematic assault on democratic institutions and an attempt to overthrow a presidential election. So we have set forth the truth in a series of hearings. And we’re going to set forth the truth in our final report, along with a set of legislative recommendations about what we need to do to fortify American democracy against coups, insurrections, electoral sabotage, and political violence, with domestic violent extremist groups involved.

So, we’re going to put all of that out there. Look, when — when I was over in the Senate with the impeachment team, I told the Republicans there that this was our opportunity to deal with the problem of Donald Trump, who had committed high crimes and misdemeanors against the people of the United States. And they needed to act on behalf of the country and the Constitution, but, if they didn’t, he would become their problem.

And, at this point, Donald Trump is the problem of the Republican Party, and he may destroy their party.

MARGARET BRENNAN: Can you get an Electoral Count Act passed in this lame- duck session?

REPRESENTATIVE JAMIE RASKIN: I think we can.

That’s the bare minimum of what we need to do. It’s necessary. It’s not remotely sufficient to the task because what we saw in — in 2021 and earlier, in 2020, was a systematic assault on the right to vote and an attempt to steal a presidential election by Donald Trump, an attempt to overthrow the constitutional order.

So, I think we can reform the Electoral Count Act, passing the legislation that Zoe Lofgren and Liz Cheney have proposed. But that’s just one small part of what needs to be done…

MARGARET BRENNAN: Election deniers didn’t prevail in the key battleground, but CBS tallied it, and at least 155 House Republicans in the new Congress have raised unfounded doubts about the validity or integrity of the 2020 election.

These are going to be your colleagues that you will be working with. What change is that going to affect in the working?

REPRESENTATIVE JAMIE RASKIN: Well, that’s a statement about the political contamination of the GOP by Donald Trump.

And, again, Kevin McCarthy and other leaders within the Republican Party are now required to make a decision about whether they’re going to try to rid themselves of Donald Trump and his toxic influence on the party.

MARGARET BRENNAN: But these 155 House Republicans are his constituency. Kevin McCarthy, if he wants to be leader, will need to consider the views of everyone.

Well, it’s a real problem for Kevin McCarthy now, because there are certain pro-Trumpists within his House caucus who refuse to accept that he’s really with Trump, and they want to get rid of McCarthy. And some of them, they have names very early in the alphabet, like Biggs. And they might just vote for Trump when they, you know, take the roll call for speaker.

So we know that the — the hard-right Freedom Caucus people are in search of another candidate. And one potential candidate whose name has been floated is Donald Trump himself, because the speaker of the House does not have to be a member of the House. And they are talking about putting Trump right there.

MARGARET BRENNAN: That’s not a real option, though.

REPRESENTATIVE JAMIE RASKIN: Well, they talk about it repeatedly.

And if Trump decided he wanted to do it, it would pose a profound problem for their party, because they refused to do the right thing early on. I mean, today, it seems like the spell has been broken. It’s begun to dissolve. We don’t have Republicans around the country claiming that they really won when it’s been certified that they lost their elections.

And yet there is still this big lie dogma, which, as you say, has been embraced by 150 members within their caucus. And so that is going to create profound cognitive and political dissonance within the GOP. Is it really Trump’s party? Or does it stand for something else?

MARGARET BRENNAN: Would you urge President Biden and the White House to comply with all these House Republican investigations that have been promised?

REPRESENTATIVE JAMIE RASKIN: Well, the — obviously, everybody’s got to comply with the law, such as the law is.

You know. We would hope that they would feel chastened by the voters of America, who dealt them an historic repudiation. I mean, they were talking about picking up 40 or 50 or 60 seats. We — the Democrats may indeed win the House, the way, yesterday, we won the Senate.

So it is a repudiation of that kind of right-wing big lie, election- denying, character assassination politics that Donald Trump brought right to the heart of the Republican Party.

MARGARET BRENNAN: Congressman, thank you for being here and joining us today.

At least 155 GOP “election deniers” will serve in the new House, @CBSNews projects.

Rep. Jamie Raskin: “That’s a statement about the political contamination of the GOP by Donald Trump.” pic.twitter.com/HkxkAlGP1a