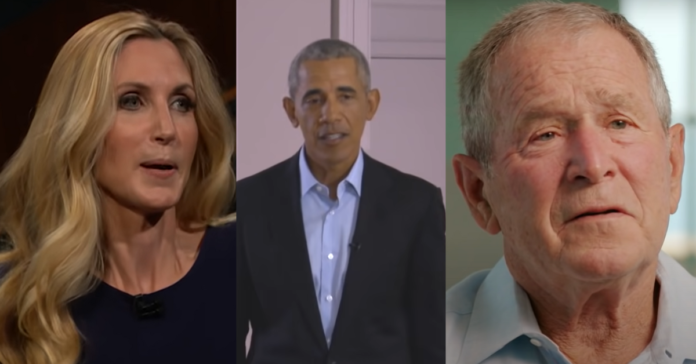 Former U.S. Presidents George Bush and Barack Obama are headlining back-to-back conferences on democracy next week where they will discuss the rising threats from authoritarianism and disinformation and how to fight them.

The George W. Bush Institute is hosting a conference on The Struggle for Freedom in partnership with Freedom House and the National Endowment for Democracy. Obama’s event will focus on the “biggest challenges democratic institutions face today.”

Ann Coulter said: “Sounds cool, hope they start with “Saddam has weapons of mass destruction,” then segue to ‘If you like your doctor, you can keep your doctor.’”

Sounds cool, hope they start with “Saddam has weapons of mass destruction,” then segue to “If you like your doctor, you can keep your doctor.” pic.twitter.com/EjnEjsUxNW

“I actually think it’s terrific that we will have these back-to-back conferences.

“We’re very mindful of what’s happening in the United States, and we have to make sure we stay on a democratic path.

“At the same time, we have to help and support others around the world.

“So we can’t simply fold up our tent and focus on everything at home. We have to focus on both things.”

Obama Foundation CEO Valerie Jarrett said “The potential of the next generation of leaders needs our full support.

“We are delighted to see the Bush Center — another institution doing the hard work to strengthen democracy — convene in Dallas to advance our shared values.”

Trump is scheduled to make his bog announcement about running for president in 2025 right before Bush and Obama’s conferences.

“I’m going to be making a very big announcement on Tuesday, Nov. 15 at Mar-a-Lago in Palm Beach, Florida.”

Dem Rep Jaime Raskin Gets Nervous, Says Trump Could Be Next Speaker Of House If GOP Holds On: “They are talking about putting Trump right there”