Dem Reps Float Plan To Get Ultimate Revenge On Trump, If House Margin Is Slim Will Try To Make Liz Cheney Speaker 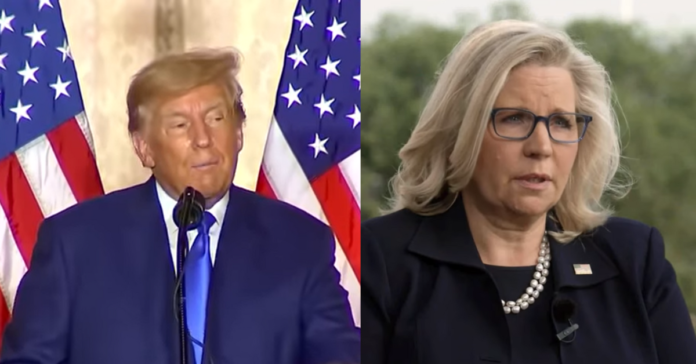 As the race to control the House of Representatives comes down to a few seats, the Dem Party needs to run the table to keep control. No one expects them to so some Dems Reps have started floating an alternative strategy.

The final House margin may be only 1 or 2 votes, and Kevin McCarthy is already feeling pressure from inside the GOP, so the Dems are telling McCarthy to strike a deal with them to secure his Speakership.

Rep. Ruben Gallego (D-AZ) first floated the idea on social media: “Just cut a deal with the Dems Kevin. Whatever you get from Freedom Caucus will not be worth it. The odds will be good but the goods will be odd.”

The Washington Examiner spoke to other Dem Reps about crossing the aisle and working with Kevin or someone else in the GOP to make them Speaker.

Just cut a deal with the Dems Kevin. Whatever you get from Freedom Caucus will not be worth it. The odds will be good but the goods will be odd. https://t.co/CZDWY1yyfO

“Won’t know that until the dust settles, the margin is determined, and how badly McCarthy needs some Dem support. Anything is possible,” one said. “Close only counts in horseshoes and hand grenades, not in speakership races.”

Another said: “If he asks, it could be a possibility.

Another Dem said making a deal to put Kevin in the job would be preferable to having someone like Majorie Taylor Greene or Jim Jordan as Speaker.

“I doubt it, but I guess if the alternative is Rep. Marjorie Taylor Greene (R-GA), it could be possible. I think it’d be more about the alternative than anything he could give.”

One centrist Dems then floated a plan the Dems are whispering about behind the scenes – put Liz Cheney in as Speaker to get the ultimate revenge on Trump.

The Dem Rep said: “Under no circumstances would just about any Dem ever vote for someone who has downplayed Jan. 6.

“I’m one of the most bipartisan people in the place, and the thought of supporting Kevin makes me laugh.

“It’s an insane proposition to consider supporting someone like him.

“I would never do that.

“No Dem with principles and a belief in democracy would ever do that.”

The Rep added that there are currently private conversations about “Voting for Liz Cheney and getting a hearty group of both sides to vote for her as a rebuke of Trumpism in a scenario where Kevin couldn’t get the votes.

“I would classify them as serious in intent to put forth a principled option with the goal of bringing people together but not serious in that I can’t imagine that getting to 218,” the Rep said.

Kari Lake Tells Supporters: “The GOP cavalry is coming, buckle up boys and girls, it’s about to get fun”