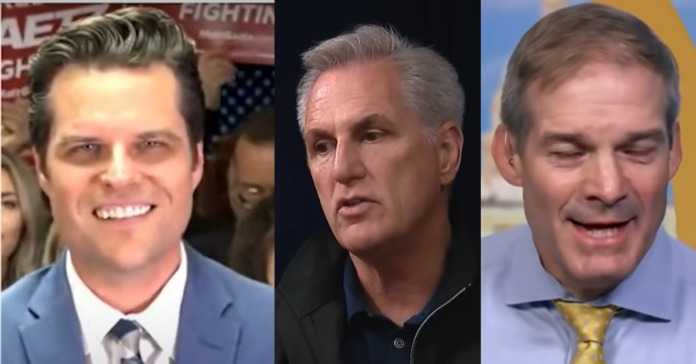 “I prefer Ohio’s Jim Jordan. And it is not always easy for a guy from the deep south to be for someone from a Big 10 state. But I am certain that Americans didn’t hand Republicans this majority in the House just to watch the speaker’s gavel get handed from one member of the California delegation to another.

“With such a slim majority, we shouldn’t be starting the C-Team. We need to put our star players in a position to shine brightest so that we can attract more people to our policies and ideas.

“The policies Kevin McCarthy has pushed are as unhelpful as they are unserious.

“None are actually inspired by Kevin McCarthy, though many feel financially beholden to him because He is the Lebron James of special interest fundraising.

“In this last cycle Kevin McCarthy and his team raised half a billion dollars in campaign money, and that buys a lot of friends, or at a minimum rents them.

“There is a movement among some in the House Freedom Caucus to request a delay in the leadership elections, because we don’t yet know who will be a Republican member of Congress,” he said.s or at a minimum rents them.

McCarthy said on Fox News he was “not concerned” about GOP lawmakers in his conference who are unhappy with him.

“Since I’ve been leader for the last four years, we’ve only gained seats.

“I think I accomplished the goal that we wanted to.

“People could have input. We want to have a very open input process.

“We’re going to have a smaller majority.

“So we’re going to find that we work together to think about what else we did.

“Not only did we win the majority, we beat the DCCC chair.

Kevin is FLIGHT over FIGHT when the chips are down

He is not a Speaker for these times

So proud of my Senator!

We should not hold leadership elections in the House or Senate until we know exactly who will constitute the Republican conferences in each chamber.

Marco knows we must be very deliberate about this & make good choices for the people! https://t.co/NcuAvoiyva

Lauren Boebert Breaks Silence, Puts Dems On Notice: “I will be there to help fire Nancy Pelosi as Speaker of the House”