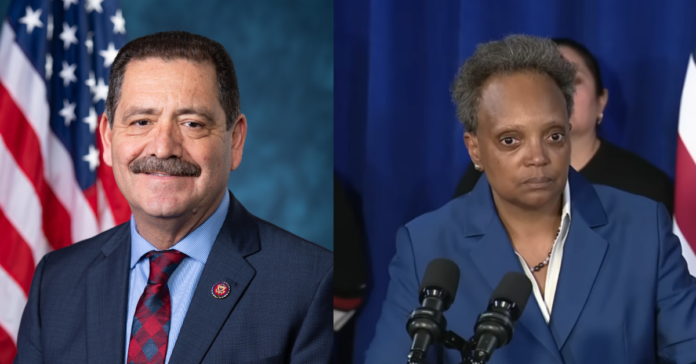 A Dem Rep from Chicago who was just re-elected put Mayor Lori Lightfoot on notice and said he will primary the failing Lightfoot. Garcia said

“It is quite evident that the winds of change are blowing across the city of Chicago this morning. When I walk down 26th Street, I see the hustle and bustle. I feel at home. I feel proud. But Chicago is at a crossroads. It’s not like that for everyone.

“Chicago needs a leader with a vision of our future and the know-how and the empathy to get us there together. From crime to unemployment to the shortage of affordable housing, there is so much we need to build.

“As we emerge from a global pandemic and a racial reckoning that exposed the painful history of inequity in our city.

Lightfoot campaign goes after Chuy Garcia as a “career politician” who is abandoning Democrats to go after a “fellow progressive” pic.twitter.com/It0Lm3tc82

“People are still living paycheck-to-paycheck, and folks are still in fear of losing their homes, their livelihoods and, yes, their loved ones.

“We should be able to look across our skyline and see cranes and new growth as well as equitable development in our neighborhoods, bringing new, good-paying union jobs, new retail and new vitality to our city.

A tough week for Mayor Lightfoot: SEIU 73 backs Brandon Johnson, Chuy Garcia announces for mayor and Anjanette Young is at City Council to push for tougher rules on police raids.

Federal Judge Rebukes Joe Biden, “In This Country We Are Not Ruled By An All-Powerful Executive With A Pen And A Phone,” Rules Student Loan Forgiveness Plan Illegal