Chris Wallace Gets Bullied By AOC, Folds Like Cheap Suit: “I would object to that, I do not believe that I am as extreme as Marjorie Taylor Greene” 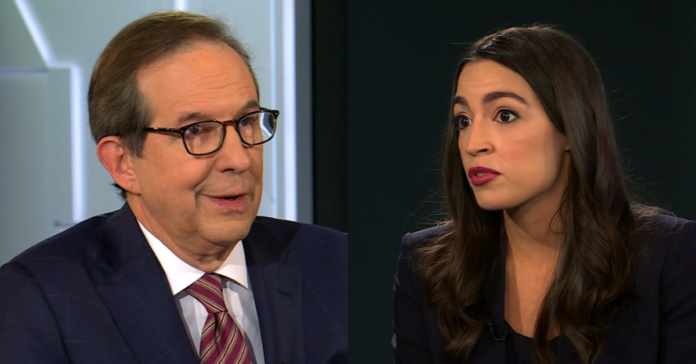 CNN host Chris Wallace got bullied by Democratic Congresswoman Alexandria Ocasio-Cortez when he asked if she agreed that “people want both parties to move from the fringes, from the extremes back to the center.”

Wallace has a new show ‘Who’s Talking to Chris Wallace’ on HBO Max where he gushes over celebrities like a school girl so it is not surprising AOC rolled over the former Fox News star and now B-teamer at CNN.

Chris Wallace: “Do people want both parties to move from the fringes, from the extremes back to the center?

Rep. Ocasio-Cortez: “I think a lot of people in this country may say yes, but it’s important for us to dig into the substance of what that actually means.

“As someone who is often, I think, characterized as extreme.

“I of course, would object to that I do not believe that I am as extreme in the way that Marjorie Taylor Greene on the Republican side is extreme the idea that there is an equating of believing in someone who believes in guaranteed universal health care in the United States was someone who believes that undocumented people should incur physical harm are somehow in the same level of extreme is something that I would object to.”

“The last time I ran into A.O.C., we were beating her endorsed candidate two to one in a primary, and I didn’t see her one minute of these midterms helping our House majority.

“So, I’m not sure what kind of advice she has, but I’m sure she’ll be generous with it.

“But let’s be clear, she had almost nothing to do with what turned out to be an historic defense of our majority. Didn’t pay a dollar of dues. Didn’t do anything for our frontline candidates except give them money when they didn’t want it from her.

“There are other voices who should be heard, especially when suburban voters have clearly rejected the ideas that she’s most associated with, from defunding the police on down.

“She’s an important voice in our politics.

“But when it comes to passing our agenda through the Congress, or standing our ground on the political battlefield, she was nowhere to be found,” Maloney said.

WATCH: AOC Objects When Chris Wallace Asks Her If ‘Both Sides’ Need To ‘Move From The Extremes’ https://t.co/OoPBNO799T

Rep. Alexandria Ocasio-Cortez (D-NY) tells CNN’s Chris Wallace how she navigates feeling danger in her life, and how that has shaped her political moves. Watch: https://t.co/HOZ2MwsRj6