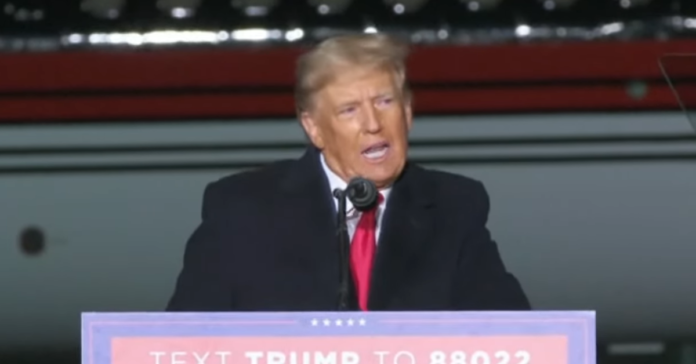 Former President Donald Trump has overruled some of his advisers who want him to wait until after the Georgia Senate runoff to officially launch his 2024 presidential campaign.

The GOP could easily win the Arizona and Nevada Senate races making the Georgia runoff moot as they would win the Senate with 51 votes so all negative talk is way too early.

Kayleigh McEnany said on Fox News she would advise him to postpone until after Georgia. She said: “Getting Herschel Walker over the finish line. I know there’s a temptation to talk about 2024. No, no, no. 2022 is not over. No contender should announce for 2024 until we get through December 6th.

“Every Republican energy needs to go to grinding the Biden agenda to a halt.”

“Of course, President Trump had said he’d be making an announcement on Nov. 15, next Tuesday.

“I’m advising the president to hold off until after the Georgia race.

“Priorities A, B and C need to be about Herschel right now.

“This is bigger than anything else in the country. We’ve got to show the focus is on Georgia.”

Trump suggested to Fox News yesterday that he would go ahead as planned. Trump is famous for his flexibility but a new report removes all doubt.

Trump is pissed at the media and the GOP establishment who, because they haven’t won the midterms yet, are starting to whisper he is a dead man walking politically.

According to NBC reporter Marc Caputo:

“A senior Trump adviser just confirmed Tuesday’s announcement and said ‘the media, the corporate elites, and political establishment have all moved in unison against Donald Trump at their own peril.’

A senior Trump adviser just confirmed Tues announcement & said “The media, the corporate elites, and political establishment has all moved in unison against Donald Trump at their own peril. It’s like they want to recreate 2015-2016. Let them. We are doing it again. Buckle up”

Invites for Trump’s announcement should go out today.

Donald Trump: “I’d like to apologize to Melania and Sean Hannity for all of the fictional stories made up out of thin air being dumped on you by reporters”