Paul Ryan Makes Move Against Trump After Midterms: “I think Donald Trump gives us problems politically, Trump’s kind of a drag on our ticket” 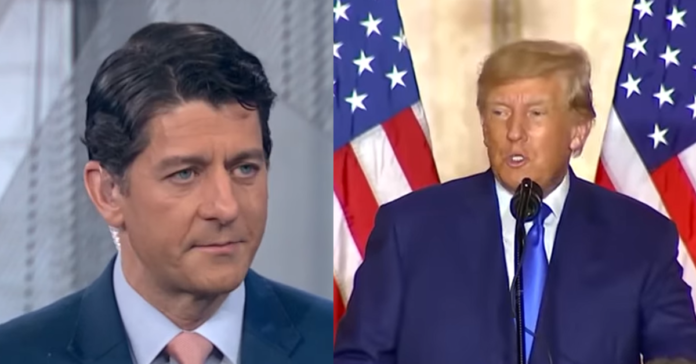 “Republicans didn’t see that red wave like they were predicting,” said WISN 12 News reporter Caroline Reinwald. “Why do you think that is and what kind of lessons do you think Republican leadership should be taking away from that?”

Ryan said: “I think we’re going to have to do a lot of soul searching and head scratching, looking through and parsing the numbers as to why we didn’t perform as well as we would have liked to.

“Ron got re-elected, I’m very happy to see that. It was a mixed blessing night, but we should have done better than we did.

“I think Trump’s kind of a drag on our ticket.

“We lost the House, the Senate and the White House in two years when Trump was on the ballot, or in office.

“I think we just have some Trump hangover.

“I think he’s a drag on our office, on our races.”

“What do you think’s going to happen if Donald Trump announces he’s going to run for president again?” Reinwald asked Ryan.

“I mean, I assume he’s going to announce, but I honestly don’t think he’ll get the nomination at the end of the day.

“We want to win the White House and we know with Trump we’re so much more likely to lose.

“Just look at the difference between votes, between Trump candidates and non-Trump aligned candidates.

“It’s really clear to me and the evidence is pretty stark that if we have a nominee not named Trump, we’re so much more likely to win the White House than if our candidate’s named Trump.

“We have to offer the country a better way forward.

“I think we have to offer the country solutions.

“We have to offer the country a really clear and compelling choice as to how our party is ripe and ready to solve big problems confronting the country and that we’re putting leaders forward that people can vote for that they want to vote for,” Ryan said.

BREAKING: Paul Ryan calls on the GOP to not nominate Trump in 2024https://t.co/i0iWHE29F8