Donald Trump: “I’d like to apologize to Melania and Sean Hannity for all of the fictional stories made up out of thin air being dumped on you by reporters” 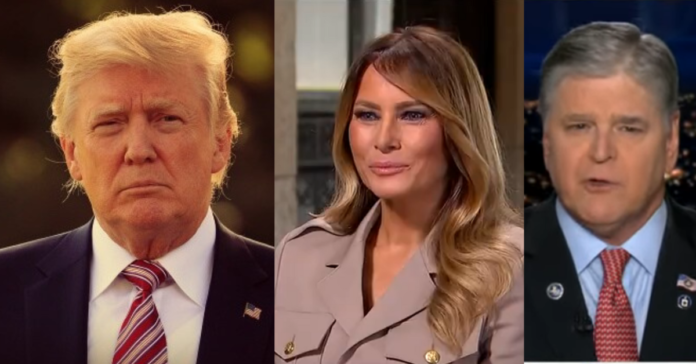 Former President Donald Trump apologized to Melania Trump and Sean Hannity for all the ‘fictional stories made up out of thin air, with no sources despite them claiming there are, being dumped on you by reporters who know’ better.

Trump said: “There is a Fake Story being promulgated by third-rate reporter Maggie Hagaman of the Failing New York Times, that I am blaming our great former First Lady, Melania, and Sean Hannity, that I was angry with their pushing me to Endorse Dr. Oz.

“First of all Oz is a wonderful guy who really worked hard and was a very good candidate, but he WAS LONG IN THE RACE before I ever Endorsed him, they had NOTHING to do with it, he was not a “denier” (his mistake!), & I was not at all ANGRY. Fake News!

“I’d like to apologize to Melania and Sean Hannity for all of the Fake News and fictional stories (made up out of thin air, with no sources despite them claiming there are!), being dumped on you by reporters and “News” Organizations who know these stories are not true.

A senior Trump adviser just confirmed Tues announcement & said “The media, the corporate elites, and political establishment has all moved in unison against Donald Trump at their own peril. It’s like they want to recreate 2015-2016. Let them. We are doing it again. Buckle up”

“The Fake News Media is “Crazed” and totally out of control.

“I only wish the public could understand how really corrupt and crooked they are.

“They MAKE UP stories and then push them down your throats.

“Despite having picked so many winners, I have to put up with the Fake News.

“Such an opportunity for another media outlet to make an absolute fortune, and do good for America. Let’s see what happens?” he said.

Scott Jennings, a former McConnell aide, suggested DeSantis and Youngkin as potential alternatives and called on them to move urgently. “After Jan. 6, the G.O.P. hesitated and he quickly recovered. DeSantis cannot hesitate.”

Comes the “it’s fake news” statement from Trump about reports of his anger, reports which aides have been trying to tamp down for several hours. Trump insists he’s not moving his announcement timeline (which nearly all his advisers want him to do) https://t.co/xbpXDP4YQW