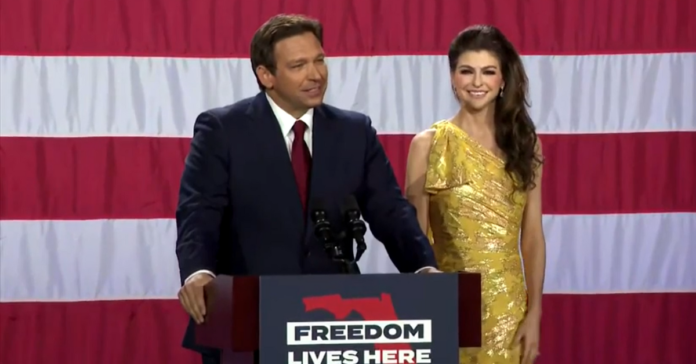 Florida Gov. Ron DeSantis (R) said that voters had “rewritten the political map” in Florida when they gave him a landslide win that saw DeSantis win the formerly solid-blue Miami-Dade County. Ron is the first Republican gubernatorial candidate to win the county since 2002.

He said in his victory speech: “You know over these past four years we’ve seen major challenges for the people of our state for the citizens of the United States and above all for the cause of freedom. We saw freedom in our very way of life and so many other jurisdictions in this country wither on the vine. Florida held the line.

We chose facts over fear. We chose education over indoctrination. We chose Law and Order over rioting and disorder. Florida was a refuge of sanity when the world went mad, we stood as a citadel of freedom for people across this country, and indeed across the world.

We faced attacks, we took the hits, we weathered the storms but we stood our ground we did not back down. We had the conviction to guide us and we had the courage to lead we made promises.

We made promises to the people of Florida and we have delivered on those promises.

Now thanks to the overwhelming support of the people of Florida we not only want election we have rewritten the political map.

Thank you for honoring us with a win for the ages.

I want to thank all of our campaign staff from campaign manager Genera on down this was the best run campaign in the history of Florida politics.

I want to thank all of our wonderful volunteers who worked so hard to get out the vote your support means the world to Casey and I. God bless you and thank you

Now it’s a lot easier to run a good campaign when you got a great record to run on.

I would not have been able to see the level of accomplishments that we saw unless I had outstanding personnel working in the executive office of the governor as well as heading state agencies.

These folks worked hard to implement our agenda. They believed in our agenda and the results have been historic thank you for your support.

Thank you to Miami-Dade County, thank you to Palm Beach County now we’re still counting the votes but it’s clearly apparent that this election we will have garnered a significant number of votes from people who may not have voted for me four years ago.

And I just want to let you know I am honored to have earned your trust and your support over these four years.

The woke agenda has caused millions of Americans to leave these jurisdictions for greener pastures, now this great exodus of Americans for those folks Florida has served as the promised land.

We have embraced freedom, we have maintained law and order,  we have protected the rights of parents, we have respected our taxpayers and we reject woke ideology

We will never ever surrender to the woke mob Florida is where woke goes to die.

We’ve accomplished more than anybody thought possible four years ago but we’ve got so much more to do and I have only begun to fight, God bless you all.

Thank you very much thank you for a historic Landslide victory.”

“Unfortunately, tonight did not turn out the way we hoped.

“We were the underdog from the minute I entered this race 18 months ago. I knew we would be outspent. I knew we would not have as many television ads. But you know me; I am an optimist. I love Florida.”