Mike Huckabee Gives Daughter Sarah Great Advice After She Made History Last Night: “Love the people, serve them regardless of whether they voted for her, prove she’s the governor for everybody” 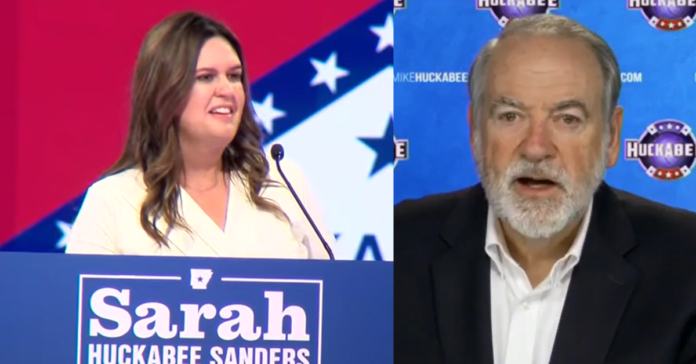 He said: “It is historic — first-time ever for a father-daughter in the same state.” He said about Sarah moving her family into the governor’s mansion in Little Rock, Arkansas, a place where she lived as a young teen when her father was governor:

“It’ll be fun for me to watch that as the grandfather.” When asked what advice he would give the new governor, Huckabee said:

“Love the people — serve them regardless of whether they voted for her.

“In fact, spend more time trying to serve the people who didn’t vote for her — and prove that she’s the governor for everybody.”

“She will bring the heart of a mom and that’s something that will be different and new,” he said.

“At the end of the day, this campaign was never about me.

“It was about each of you.

“This election is about taking Arkansas to the top.

“I know that Arkansas can be first, and I’m committed to being the leader who takes us there.”

“While we disagreed on the issues, there is no denying Sarah’s love for Arkansas.

“I believe as I have always believed, that we must come together for the sake of Arkansas.”

She concluded her speech by saying she was excited to be the governor of Arkansas for the next “eight years”. Her family joined her on stage including former Gov. Mike Huckabee and her mother Janet. #arnews #arpx pic.twitter.com/WXZ1mLcQZ7