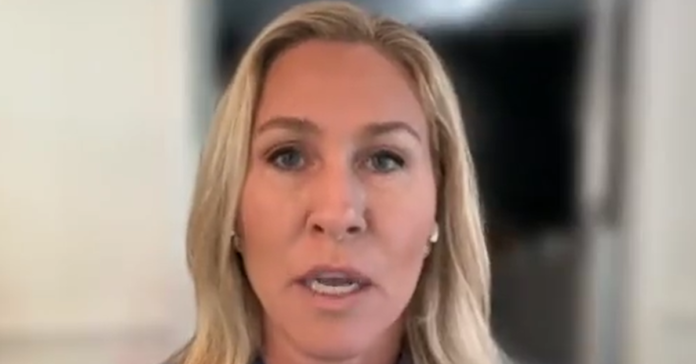 Rep. Marjorie Taylor Greene (R-GA) put Republicans trying to blame Trump for the midterms elections that have the GOP close to their goals of sweeping Congress on notice calling them ‘wimpy.’

Most expect the GOP to take the House but by a much smaller margin. The Senate is very close and may come down to a runoff. So it is premature to cast blame because the GOP may still pull it out. Greene said:

“Now, they’re trying to blame President Trump today. And I want to tell you how shortsighted and ridiculous that is, it is pathetic the people that are running out saying it’s his fault. No, that is a lazy, pathetic, wimpy, easy mindset.

“They just want one thing and then they want to carry on without doing the hard work – the real changes in the Republican Party and the way we fight the fight.

Thank you Georgia’s 14th district for putting your faith in me to be your voice and your representative in Washington.

It’s my privilege and my honor.

Thank you to all who support me. I am 100% dedicated to fight for America and the American people. I’m looking forward to it.

“Here’s why it’s not Trump’s fault.

“Trump has been being politically persecuted for the past few years now, ever since January 6th.

“He went out and did 30 ‘Save America’ rallies all over the country, he endorsed something like 285 candidates.

“He held over 50 fundraisers, helped raise over $350 million for all these public tax patients.

“President Trump is doing everything he can to help Republicans across the country and help Republicans win while he is being politically persecuted worse than any human being in our country’s history.

“People that want to blame Trump, they are lazy.

“And that’s the problem.

“We have to do the real work, fix our issues and our party to fix issues in our state elections and all over the country,” she said.

Hollywood Legend Reaches Limit With Woke Studios: “They’re destroying comedy because of 9% of the people who don’t have a sense of humor”