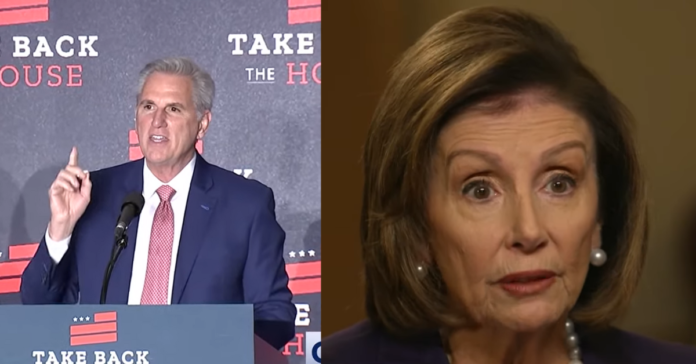 GOP Rep Kevin McCarthy broke his silence after a weird election night in America claiming to have the votes to fire Nancy Pelosi as Speaker.

The House has not been called but it looks good for the GOP. The Senate may come down to a runoff in Georgia again. In a statement, McCarthy claimed the GOP secured enough seats to flip control of the House from the Democrats.

He said: “I want to thank the millions of supporters across this country. It is clear we are going to take the House back.” During a victory party in Washington, D.C., McCarthy said:

“If you believe in freedom, hard work, and the American dream these results prove there is a place for you in the Republican Party.

“We are expanding this party.”

“While many races remain too close to call, it is clear that House Democratic members and candidates are strongly outperforming expectations across the country,” Nancy Pelosi said.

Republicans are in line for a majority because they gained many of the seats they were supposed to capture, and they are also well-positioned to win some toss-up races as well as seats in which they were underdogs.

Florida Republicans had a banner night, particularly in the House:

They picked up a couple Democratic-held seats that GOP mapmakers made redder in redistricting (the 7th and 13th districts) as well as a couple of newly drawn, Republican-leaning open seats (the 4th and 15th districts).

The GOP could pick up a sizable number of seats from the outstanding races, too.

The Northeast, especially New York, has a number of very tight races in Democratic-held seats that could go for the GOP, while red-leaning seats in Arizona and blue-leaning seats in California could potentially flip, although we are a long way from knowing the results in those places.

Together, these should get the GOP over the 218-seat hump, but how far over remains to be seen.