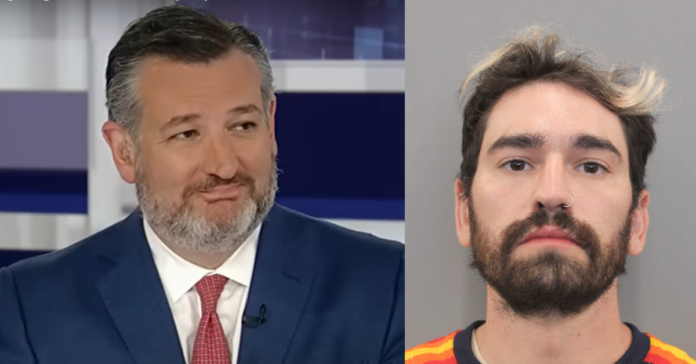 Cruz lives in the Houston area and attended several of the World Series games including Game 6 on Sunday when the Astros won. “HPD made one arrest during today’s victory parade,” the Houston Police Department said in a statement.

“A male, 33, threw a beer can at U.S. Senator Ted Cruz as the Senator was on a float in the 2400 block of Smith St. The beer can struck the Senator in the chest/neck area. The Senator did not require medical attention.”

“Nearby HPD officers arrested the male without further incident,” the statement continued.

“He was taken to jail and faces assault charges.

“We will release the suspect’s name and booking photo here when formal charges are filed.”

A slew of videos surfaced on social media Monday showing Astros fans booing Cruz, who was alongside his family and friends in the championship parade.

In one of the videos, a bystander in the parade can be seen throwing a can of beer at Cruz, who blocks it with his hand.

Cruz’s security detail and authorities then look to see which fan threw the beverage at Cruz.

Nearby HPD officers arrested the male without further incident. He was taken to jail and faces assault charges. We will release the suspect’s name and booking photo here when formal charges are filed. 2/2

Trump’s Lawyer Issues Warning To Ron DeSantis Ahead Of Trump’s Nov 15 Announcement: “He needs to stay in Florida, he’s not ready yet”

Ted Cruz Fires Back At Attacker, Lands Knockout Blow: “I’m thankful the clown who threw his White Claw had a noodle for an arm”