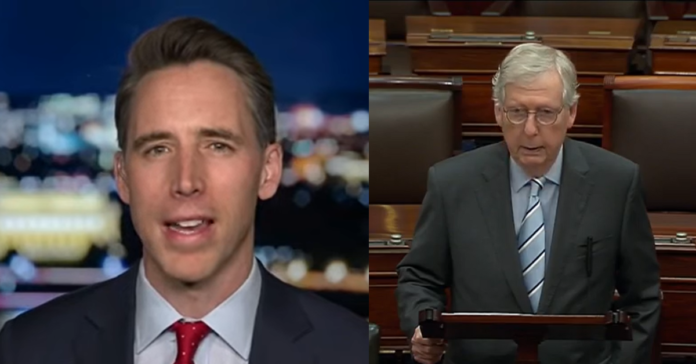 Sen. Josh Hawley, R-Mo., put GOP Leader Mitch McConnell on notice ahead of what is looking like a pretty good night for the GOP across the country.

Hawley said if Republicans take control of the U.S. Senate he won’t support Sen. Mitch McConnell, R-Ky., for another term as leader. When asked if he would support Mitch again Josh said:

“I don’t imagine I will, no. I’m not sure if any other senator will run or not. Nobody’s indicated they would. But my view is that we need new leadership in that position.”

When asked who should be the next GOP leader Hawley said “not Mitch McConnell.”

Trump said of Mitch: “This guy does not deserve to continue to be leader and hopefully somebody’s going to challenge him.

“I think we’ll probably have to live with him for two years.

“And if I run and I win, I will say don’t send me any legislation if he’s the leader, and he’ll be out in two minutes.”

Trump said GOP Senator Rock Scott would “have a lot of support” if he took on Mitch.

“I think Rick Scott is a likely candidate — he hates the guy.

“He’s tough — he’s tough, and I think he would probably go for it.

“People are very upset with Mitch McConnell — I’ll tell you who is upset with him — the public,” he said.