Whoopi Goldberg Melts Down Over Free Speech On Twitter, Throws In Towel: “As of tonight, I’m done with Twitter” 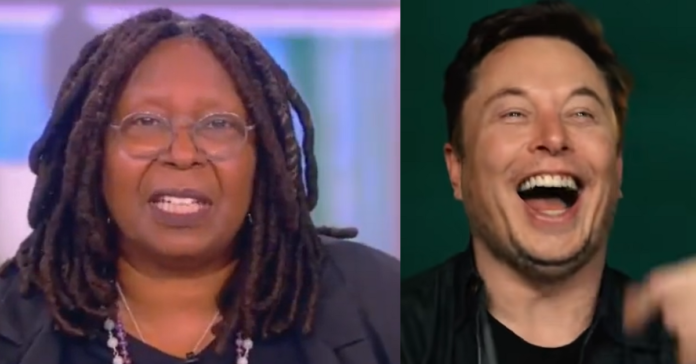 The View‘s Whoopi Goldberg announced on the ABC show today that she can’t handle the heat of free speech and is leaving Twitter calling Elon Musk’s first week leading the social media platform “a mess.”

Whoopi said: “I’m getting off today because I just feel like it’s so messy, and I’m tired of now having certain kinds of attitudes blocked now getting back on. So I’m gonna get out, and if it settles down enough and I feel more comfortable maybe I’ll come back. But as of tonight, I’m done with Twitter.”

Sunny Hostin said Twitter has become a “hellscape” since Elon Musk took over. She mentioned how the Arab Spring once used Twitter before saying: “Elon Musk is turning it into something that it was never intended to be.”

It should be noted that Elon Musk has made zero changes to the content moderation policy. Musk did ban Kathy Griffin for violating the rules.

“I’m done with Twitter.”
Whoopi declares that she’s getting off of Twitter tonight. Despite no change to Twitter’s TOS policies, just equal enforcement, she claims it’s “a mess” now. pic.twitter.com/ZY5K7OvzRg

“All speech is not free speech,” Whoopi said later.

“So, everybody has to agree on that.”

Racist Sunny Hostin claims Twitter has become a “hellscape” since Elon Musk took over. She touted how the Arab Spring once used Twitter. “Elon Musk [is] turning it into something that it was never intended to be.”Being elitist, she refuses to be part of a Twitter public square. pic.twitter.com/mxA0Gze7MY

Sunny demands people vote for Dems so the Senate can undo Section 230 so they crack down on Twitter and Elon Musk.
“All speech is not free speech,” Whoopi shrieks. “So, everybody has to agree on that!” pic.twitter.com/Zrk4VZfIKb

Barack Obama’s Half Brother Breaks Silence, Tells Twitter Followers To “Vote Republican Up And Down The Ticket”