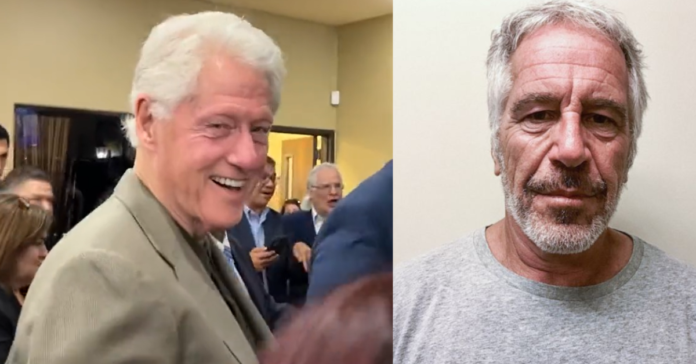 A reporter asked former President Bill Clinton about his conduct with the disgraced Jeffrey Epstein in a bad sign for the Dems heading into tomorrow’s critical vote. The desperate Dems had to bring out Barack Obama and Clinton to make the closing arguments for the Party because Kamala and Joe Biden are toxic to voters.

Clinton was in Brooklyn to boost the campaign of New York Gov. Kathy Hochul who is in a shockingly tight race with Republican challenger Rep. Lee Zeldin.

Bill said: “I’m telling you all this because the whole election could come down to how big the turnout is in Brooklyn. Lee Zeldin, he makes it sound like Kathy Hochul gets up every morning, goes to the nearest subway stop and hands out billy clubs [and] baseballs bats.”

Clinton showed up in Texas today to try to help Rep. Henry Cuellar when reporter Juan Moore caught up with Clinton.

I confronted @BillClinton at the rally he held with @RepCuellar in Laredo about his alleged connections to child sex trafficker Jeffrey Epstein. “I think the answer is clear.” pic.twitter.com/ZtDR96PJwF

“Any comment on your alleged conduct with Jeffrey Epstein.”

Clinton forced a fake smile but shot daggers from his eyes at Moore before saying:

“I think the evidence is clear.”

Now that Elon Musk owns Twitter we may get a break in the case of the missing Epostein client list. Musk, Joe Rogan, and many other independent thinkers have all called for the list to be released or leaked.

Earlier Musk posted a meme that said ‘Things I’ll never see in my life’ with pictures of a fire-breathing dragon, a dinosaur, a unicorn, and the Epstein/Maxwell client list.

Musk added the caption: “Only thing more remarkable than DOJ not leaking the list is that no one in the media cares. Doesn’t that seem odd?”

That was not the first time Musk demanded answers about the ‘missing’ client list.

Musk responded with: “Where is their ‘client’ list? Shouldn’t at least one of them go down!?”

He added a bit later: “Hey, why are they already writing my suicide story!?”

Only thing more remarkable than DOJ not leaking the list is that no one in the media cares. Doesn’t that seem odd? pic.twitter.com/JEK4TErABB

Where is their “client” list? Shouldn’t at least one of them go down!?