Trump Fires Back At Jimmy Kimmel: “Greg Gutfeld has the number one evening show on cable” 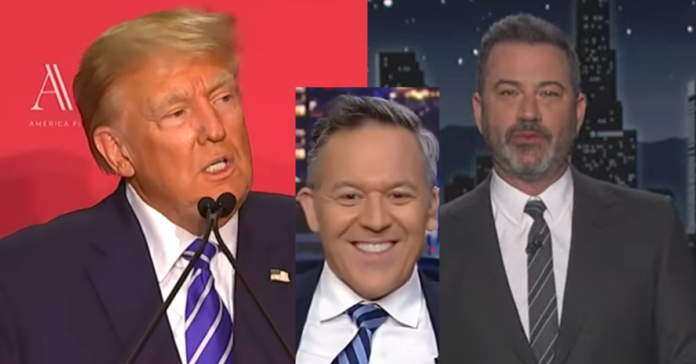 Trump said: “I saw Jimmy Kimmel said that his show’s practically dead because nobody that likes Trump will watch. And guess what? That turned out to be a majority of the people. The show is dead, and so are the other ones

“I have lost half of my fans, maybe more than that, 10 years ago among Republicans I was the most popular talk show host.

TRUMP: “I saw Jimmy Kimmel said that his show’s practically dead because nobody that likes Trump will watch. And guess what, that turned out to be a majority of the people. The show is dead & so are the other ones.”

“I just said, ‘If that’s what you want to do, I understand and I don’t begrudge you for it, but I’m not going to do that.’ “If you want somebody else to host the show, then that’s fine.

“That’s OK with me. I’m just not going to do it like that.

“I couldn’t live with myself otherwise.

“I want to be on the air when Donald Trump goes to jail.

“I very much want that. I think I would be heartbroken if I was not a part of that.

“I love this country too.”

“That flag doesn’t belong to them. And when I see somebody coming in and ruining it, I’m gonna say something about it.

Trump Gloats About Jimmy Kimmel’s Claim He Lost Half His Fans By Going After the Former President: His ‘Show is Dead’ https://t.co/lWbGklhFLP

Kari Lake Puts Joe Biden On Notice: “In Article One, Section One of our Arizona Constitution, it defines the state of Arizona by our borders, and so we can protect those borders”