Kari Lake Puts Joe Biden On Notice: “In Article One, Section One of our Arizona Constitution, it defines the state of Arizona by our borders, and so we can protect those borders” 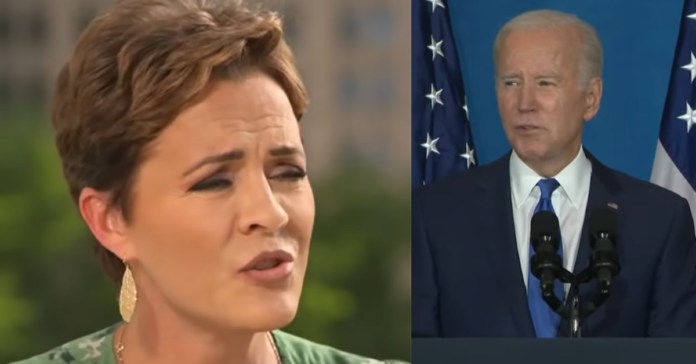 Arizona’s Republican gubernatorial nominee Kari Lake overruled President Joe Biden in a new interview and promised to secure the border if elected from what is ‘ just completely an invasion.’ She said.

“Cochise County, and what they call the Tucson sector, is where the majority of the so-called ‘gotaways’ come through. And you know, we’ve had more than 5 million people come here illegally; a million of them are gotaways. These are the people who have such bad backgrounds that they don’t want to be processed.

“They are targeting our children in other parts of Arizona through social media, encouraging them to come down and start helping with the smuggling of  people here illegally by driving them.

The Dem mayor of Del Rio — a gay Hispanic military vet, seen as a rising star in Texas — abruptly quit. Why?

Because, he said, Dems are “gaslighting” him, refusing to even acknowledge what’s happening at the border, much less do anything about it. https://t.co/V7YGWlnEuT pic.twitter.com/Geb0QNVJ82

“And so our children are being targeted on social media, ‘Hey, make a quick 1000 bucks or 5000 bucks. Come on down, we’ll provide the car, we’ll provide the gas, all you have to do is drive these people who are coming through illegally to Phoenix.’

“They’re targeting our children that way, the drugs pouring across. We had a mother and father who lost their son when he took what he thought was a Tylenol three that a neighbor gave him, and it was laced with fentanyl.

“It is just completely an invasion. And it is an effort by the CCP, the communists in China, working through the Mexican cartels to poison our young people in America.

“This is truly an invasion, and we have legal law to set us up.

“Our attorney general, Mark Brnovich … made a great statement saying that we truly do have an invasion, and you can use that to protect your border.

“And so we’ve got that, we’ve got Governor Ducey, who has been putting some barriers up, and he’s already in a battle with the federal government. I believe we’ll win this battle because it is our border, it is the Arizona border, and our state is defined by our border.

“In Article One, Section One of our Arizona Constitution, it defines the state of Arizona by our borders, and so we can protect those borders.

“It’s state property, we’re arguing, not federal property, that border, because of what it says in our Arizona Constitution.

“This is a health emergency; think about it.

“The poison coming across with fentanyl is killing more young Americans than any other cause of death. So you know, the ocelots and squirrels and crickets are going to have to take a little break while we get our borders under control because that’s what the EPA, you know, the environmentalists will argue — ‘We can’t secure the border because the crickets and the bugs are going to be hurt.’

“Well, they’re going to have to wait for a bit because we are seeing our people being hurt in Arizona and across this country.

“And so we’re going to secure that border. We have many ways and many tools in the toolbox to address what’s happening at the border and secure it. And when we don’t have the right tool, we’ll do a MacGyver tool. And we’ll make one to make sure that we can secure this border.

“It’s horrifying what we saw and heard in Cochise County yesterday, and we had the whole Republican ticket with us.

“We need Blake to go back to the United States Senate and push back against the overreach of the federal government, free up some money so we can, for sure, you know, secure our border,” she said.

The left has alienated America’s fastest-growing group of voters—just when they were supposed to give the party a foolproof majority, @TimAlberta writes. Why Democrats are losing Hispanic voters: https://t.co/oS1lE5DKca

Trump Fires Back At Jimmy Kimmel: “Greg Gutfeld has the number one evening show on cable”