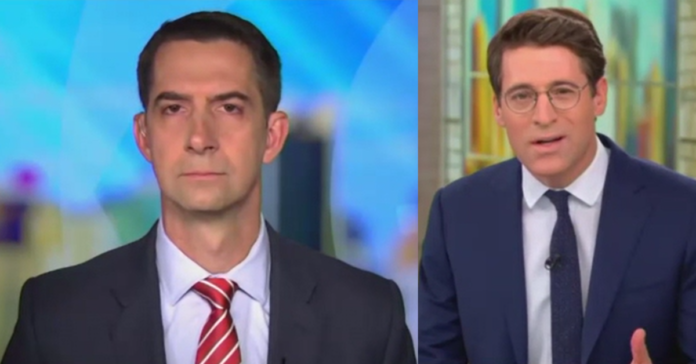 Senator Tom Cotton (R-AR) overruled a CBS reporter who tried to blame conservatives and Republicans for the brutal attack on Paul Pelosi in San Francisco.

TONY DOKOUPIL: Senator Cotton also has a new book out today. It is called Only the Strong: Reversing the Left’s Plot to Sabotage American Power. In the book, Cotton looks at decades of U.S. history and makes the argument that progressives and then Democrats have weakened the country and have done so intentionally. Senator Cotton joins us now. Senator, good morning. Congratulations on getting a book launched into the world. Not an easy thing.

I do want to get to the book, but I want to begin with this news from Paul Pelosi and the Speaker of the House, one of your fellow elected officials. A break-in in her home, her husband assaulted and, according to the authorities, the perpetrator was looking for her to potentially break her kneecaps — wheel her into Congress as an example of consequences. What’s your reaction to all that?

SENATOR TOM COTTON (R-AR): Well, Tony, thanks for having me on. It’s a terrible crime against Paul Pelosi. I wish him the very best and a full recovery and we should throw the book at the assailant.

I would point he was apparently in the country illegally. If we would protect our border and kick out people who are on visas that had expired, he wouldn’t have been here to commit this crime to begin with.

This is just one more example, though, of what we should always do with violent criminals, which is throw the book at them. We should do the same thing to the person who tried to assassinate Brett Kavanaugh.

The same thing to all those agitators who are protesting in violation of federal law outside of justices’ homes.

And for that matter, not just speakers of the house or Supreme Court justices, but any common criminal who attacks someone, who rapes, who murders should have the book thrown at them.

We need to crack down and get tough on this crime in the country.

COTTON: That’s the solution to all of these heinous crimes.

DOKOUPIL: — senator, for the moment I want to separate out everyday crime and what seems to be politically-motivated crime and get your thoughts on whether the temperature in the country is just too high, the information is just too much, and that we’re going to see more, not less political violence going forward.

That’s the concern. People in your own party have voiced that concern.

COTTON: Well, you’ve seen deranged lunatics attack both Democrats and Republicans alike. I don’t think John Boehner 12 years ago pointing out that Nancy Pelosi passed ObamaCare or Kevin McCarthy now pointing out that she passed trillions of dollars in spending that caused this inflation led to this, you know, apparent nudist activist breaking into their home. The simplest way to stop crimes like this is to get tough on crime.

It’s not to try to stop campaigning in the middle of a campaign seven days before an election on legitimate issues of public concern.

DOKOUPIL: And absolutely. People should continue to campaign on issues of public concern.

No — no debate there. But, to be clear from your answers here, I’m hearing, you don’t see any connection between things said in this country — in particular by people denying the results of the 2020 election and the motivations of, as you call it, this mad man in Paul Pelosi’s house with intentions against the speaker.

You don’t see a connection between the political rhetoric and the acts of this individual and other individuals?

COTTON: Well, Tony, no more connection than Chuck Schumer going to the steps of the Supreme Court and saying that Brett Kavanaugh wouldn’t know what hit him if he issued rulings that Chuck Schumer disagreed with. And what do you have?

A left-wing hitman showing up at Brett Kavanaugh’s house to assassinate him. The answer to all of these crimes is to get tough on crime and throw the book at these criminals.

DOKOUPIL: Alright, Senator, let’s talk about this book, Only the Strong. You make the case in this book that Democrats are not just making, as you say, mistakes, which Republicans have made, but are intentionally, as you put it, plotting against America, trying to weaken America, a design — a decline by design is how you put it. Why’d you want to put this book out right now?

COTTON: Well, after that Afghanistan fiasco last year, Tony, so many Arkansans asked me: how — how did this happen? How did we lose to a medieval band of savages in Afghanistan?

I wanted to explain, going back to the origins of the modern progressive movement with Woodrow Wilson, the most ideological man to ever become president, why so many on progressive left seem to be weakening our country.

At best, these progressive are ambivalent about America and they’re openly hostile to American power. That’s why you see them undermining the foundation of American power, a strong and fierce some military, a prosperous, free economy, sovereignty at our borders, and freedom of action in the world, American energy production. This is not something that just happened. It’s not bad luck.

Joe Biden, for instance, in the 2020 campaign, said that he was going to end fossil fuel production in America.

That’s why we have gas at almost $4 a gallon. That’s why people are going to struggle to heat their homes in some parts of the country this year. So, I wanted to explain why it’s happening, why it’s driven by the left’s ideological ambitions, and also why lay out a roadmap for how we can recover American —

DOKOUPIL: — Senator, there is a lot at stake in these midterm elections and there will be points and counter points to everything you just said there.

COTTON: Well, thanks, Tony, for even asking the question. But I just say as one of my drill marshals used to say in basic rifle marksmanship, there’s a 50-meter target, there’s 300-meter targets.

There’s time to hit the 300-meter target, but right now, the 50-meter target is seven days away. And after this election will be a time to look towards 2024.

I hope it’ll be a good book for everyone to read, whether they’re in public office or whether they simply want better elected officials in office.