Joy Reid Slams ‘Far-Right Critics’ After MSNBC’s Surprise Firing Of Host Tiffany Cross: “We will be here to support anything Tiffany Cross ever does” 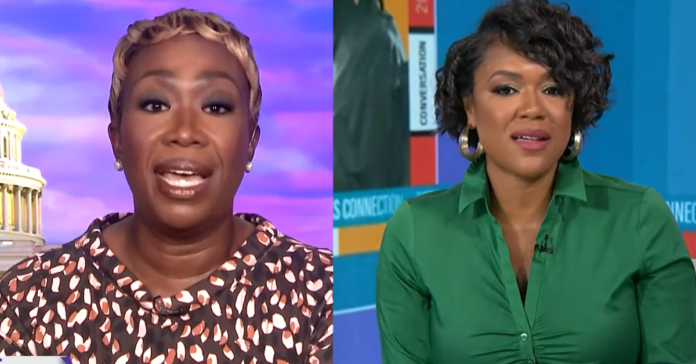 “Before I go, I really do just want to say one quick thing about my friend, colleague, and sister Tiffany Cross. She’s not just my friend, she’s my sister. I love her, I support her, I was boosting for her to get the show that she created, ‘The Cross Connection,’ which she put her heart and soul into every day.

“I just want to say that those on the ‘far-right’ who are attacking her on a social media app that I won’t name. You don’t understand how sisters move. So, watch this space.

“Know that. Believe that.”

“Repeated bad behavior on and off-air. Bad judgment,” a source told Fox News when asked about MSNBC’s move. Cross was previously a fill-in host for Joy Reid’s weekend show “AM Joy.” She got her own Saturday program in 2020.

She made headlines recently for calling Supreme Court Justice Clarence Thomas “Justice Pubic Hair on My Coke Can.”

“A source confirmed that there were concerns at the network that Cross’s commentary, on the show and elsewhere, did not meet the network’s editorial standards.

“In an appearance on Charlamagne Tha God’s Comedy Central show on Thursday, Cross said Florida “literally looks like the dick of the country.”

“Cross delivered pointed commentary during her show, at times singling out other media hosts.

“After Megyn Kelly attacked her earlier this month and called her the most “racist person on television.”

“Cross called Kelly “the blackface expert.” Kelly had moved to Fox News to NBC News in 2017 with a reported longterm contract worth $69 million, but her daytime show failed to make a dent in the ratings and she was beset with controversy over comments she made about wearing blackface as a Halloween costume.

“Her production staff was informed of the decision Friday morning, according to three people familiar with the matter.

“MSNBC declined to make executives available for comment, and Cross could not be reached for immediate comment.

“MSNBC decided not to renew Cross’ contract after two years, according to one of these people, and severed ties with her immediately.”

Joy Reid said what she said! Right wing bigots really think they done ended Tiffany Cross, but they got another one coming. The Black community stands with @TiffanyDCross. She may have been pushed down, but we will lift her up! Know and trust that! pic.twitter.com/NVBXHd2CYB

MSNBC has decided not to renew Tiffany Cross’ contract after two years. The network has unexpectedly severed ties with her immediately. https://t.co/CD5OmxBMN2