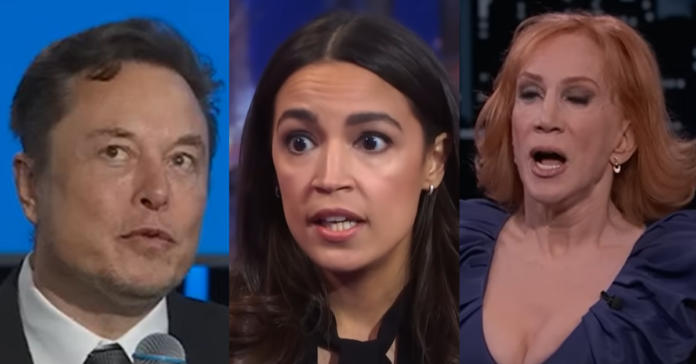 Twitter CEO Elon Musk checkmated Rep. Alexandria Ocasio-Cortez, Kathy Griffin, and all the other crybaby Hollywood celebrities who complained about paying for their coveted blue checkmark.

AOC said: “Lmao at a billionaire earnestly trying to sell people on the idea that “free speech” is actually a $8/mo subscription plan.” Musk said: “Your feedback is appreciated, now pay $8”

Kathy Griffin was not happy she would be forced to pay Musk. She said: “I don’t think it’s that blue check people are too cheap to pay 20 bucks a month, I just don’t wanna give any money to Elon musk and the Saudi family.

“I’ll stay until the midterms. In the meantime, I’m signing up for all other sites until we can settle on one. Look, I like you guys and all, but not $20.00 a month like. Inflation! I am enjoying tick-tock. I will look into blue sky and I think there’s two other ones people are talking about.

The Twitter blue with verification (no verification of identity) has shipped ahead of schedule. pic.twitter.com/3z5PjFpfbA

When asked why not just refuse to pay Elon Musk, Kathy said:

“Well, but then my acct and all blue checks will be cloned etc. Nonstop swarming. Having to disavow tweets attributed to me. No thanks. Plus musk is 🤮.”

Today Elon Musk shipped the Twitter blue verification product ahead of schedule and the celebs will be forced to eat their words and pay up.

Starting today, we’re adding great new features to Twitter Blue, and have more on the way soon. Get Twitter Blue for $7.99/month if you sign up now

Half the ads & much better ones: Since you’re supporting Twitter in the battle against the bots, we’re going to reward you with half the ads and make them twice as relevant.

Priority ranking for quality content: Your content will get priority ranking in replies, mentions and search. This helps lower the visibility of scams, spam, and bots.

Availability: Twitter Blue with verification is currently available on iOS in the US, Canada, Australia, New Zealand, and the UK.

You will also get:
– Priority in replies, mentions & search, which is essential to defeat spam/scam
– Ability to post long video & audio
– Half as many ads

Joy Reid Slams ‘Far-Right Critics’ After MSNBC’s Surprise Firing Of Host Tiffany Cross: “We will be here to support anything Tiffany Cross ever does”