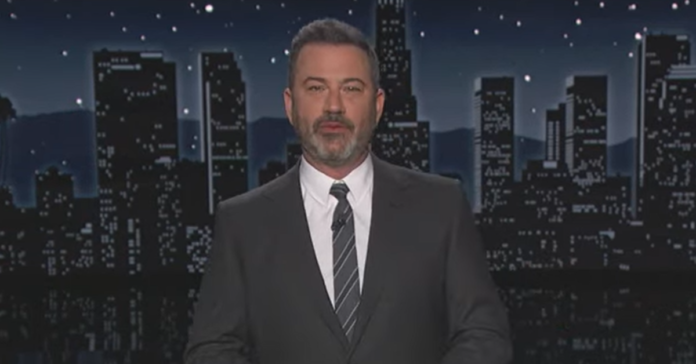 Hollywood star Jimmy Kimmel came clean this week and admitted he lost at least half of his fanbase due to telling anti-Trump jokes on his late-night show.

Jimmy said: “I have lost half of my fans, maybe more than that, 10 years ago among Republicans I was the most popular talk show host.” He said he was even told by ABC executives to tone it down but he refused.

“I just said, ‘If that’s what you want to do, I understand and I don’t begrudge you for it, but I’m not going to do that.’ “If you want somebody else to host the show, then that’s fine. That’s OK with me. I’m just not going to do it like that.

“I couldn’t live with myself otherwise.

Also due to giving weepy sermons instead of telling jokes.

“[Kimmel] estimates he lost around half of his audience due to Trump jokes.”https://t.co/eUX15DVzPd

“I want to be on the air when Donald Trump goes to jail.

“I very much want that. I think I would be heartbroken if I was not a part of that.

“I love this country too.”

“That flag doesn’t belong to them. And when I see somebody coming in and ruining it, I’m gonna say something about it.

It is too late for Jimmy as Greg Gutfeld has filled the void and regularly beats him in the ratings.

Gutfeld! was once again one of the highlights of the month garnering 2,159,000 P2+ and 337,000 A25-54 and continuing to make television history with its second highest-rated month since launch in viewers.

Airing at 11 PM/ET, the program also topped every show on CNN and MSNBC with both viewers and A25-54.

Jimmy Kimmel admits that his relentless jokes about former President Donald Trump has cost him half of his fans — “maybe more than that.” https://t.co/lYlzOGxriV pic.twitter.com/vHGVA9a5YL