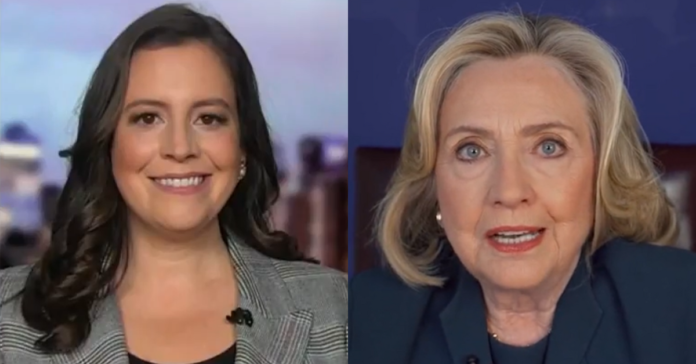 Rep. Elise Stefanik, R-N.Y., set Hillary Clinton straight and said there is a “crime crisis” in New York state which she tied to the Dem Gov. Kathy Hochul’s policies. (See video below)

Stefanik went on Fox News to say she thinks Lee Zeldin (R) is going to win and she took some time to respond to Hillary who accused the Republicans of fearmongering on crime. Stefanik said:

“Lee Zeldin is running on and is going to win on tough-on-crime policies. He will announce a crime emergency in New York State on day one when he’s sworn into office. And I will tell you, there is huge momentum not just from Republican voters, but from Democrats and independents as well who want to see a change in New York State.”

Stefanik responded to Hillary saying this is not a scare because “people are scared because of the crime crisis in New York State. And it’s not just in the city, it’s all across New York state. It’s upstate cities, even in my district in [northern New York.”

Hillary needs to listen to Mary Wisniewski, Director Of Communications at Cook County Chief Judge’s Office, who said she is afraid to take public transportation in Chicago after dark.

She said in now-deleted tweets: “I have ridden the @cta all my life. It has many great employees, and public transit is essential. However, after some scary incidents after dark, I will no longer take the El after evening rush hour.

“There must have been 30-plus security guards upstairs in the station, laughing, like they were at a party.

“You had to maneuver around them. But downstairs, where the trains are, NOBODY.

“No guards in sight.

“I got on the phone with a friend, and when the train came, I dashed for the first car. I’ve never been so scared.

“And I’ve taken the CTA all my life.

“I didn’t think of it because I was freaked out. If you’re going to spend millions on security, make sure they’re doing their damn job!

“Just talked to someone nice at CTA security. She said she was sorry that happened and the guards were probably reporting for their assignment.

“She said she missed the old company, K-9, who were easy to reach and efficient. She’s my age, and scared too.”

Or Hillary should talk to this victim who was jogging in a very wealthy part of New York City.

A homeless man wanted for two sex crimes — and who has at least 25 prior busts — was arrested in connection with the rape of a jogger in the West Village on Thursday and charged in all three cases, police and law-enforcement sources said.

Carl Phanor, 29, was busted at the Port Authority bus station several hours after the assault, which took place around 5:30 a.m. at Pier 45, the sources said.

Police say he grabbed a 43-year-old woman from behind as she ran in Hudson River Park, choked her and sexually assaulted her before robbing her and, according to a witness who called 911, leaving her shoeless and with blood running from her face and elbows.

He was charged with rape, grand larceny, predatory sexual assault and invalid use of a credit card.